Vivian Kong Man-wai became the first Hong Kong fencer to win a World Cup title after her success in the series in Havana, Cuba on Saturday.

Kong, who will turn 25 next month, overwhelmed France’s Auriane Mallo 15-8 in the epee final to clinch her maiden World Cup victory.

She cruised to a 15-6 win over Violetta Kolobova of Russia in the quarter-finals before putting up another good performance when she defeated Italy’s Nicol Foietta 15-7 in the semis.

Not only did her result meant that she has become the first Hong Kong fencer – man or woman – to win a World Cup title, it also boosted her qualification hopes for the 2020 Tokyo Olympics. She is now ranked seventh in the world.

Kong was delighted with her World Cup maiden victory and said: “This is a good beginning of the year for the entire team who have been working very hard to get good results. I believe there will be more World Cup champions from Hong Kong in future.”

Kong’s form has been on the rise lately. She claimed a silver medal in the series in Tallinn, Estonia two months ago after losing to veteran Jung Hyo-jung of South Korea. She then returned home for the Hong Kong Open where she won the gold medal after defeating China national team member Xiang Yixuan.

The Havana World Cup is Kong’s first tournament of the year, the same event that saw her finish with a bronze medal in 2018 when she came back from a career threatening cruciate ligament injury.

And Havana proved to be her happy hunting ground as Kong this time went all the way through to the final before snatching gold.

Hong Kong sent four fencers to the tournament but Kong was the only one who made it to the knockout stage with a direct berth because of her world ranking.

She also hopes to help carry the Hong Kong women’s épée team to Tokyo, occupying ninth spot in the world. Hong Kong are competing for a direct Olympic entry qualification for Tokyo with Asian powers South Korea (third in the world) and China (fifth). 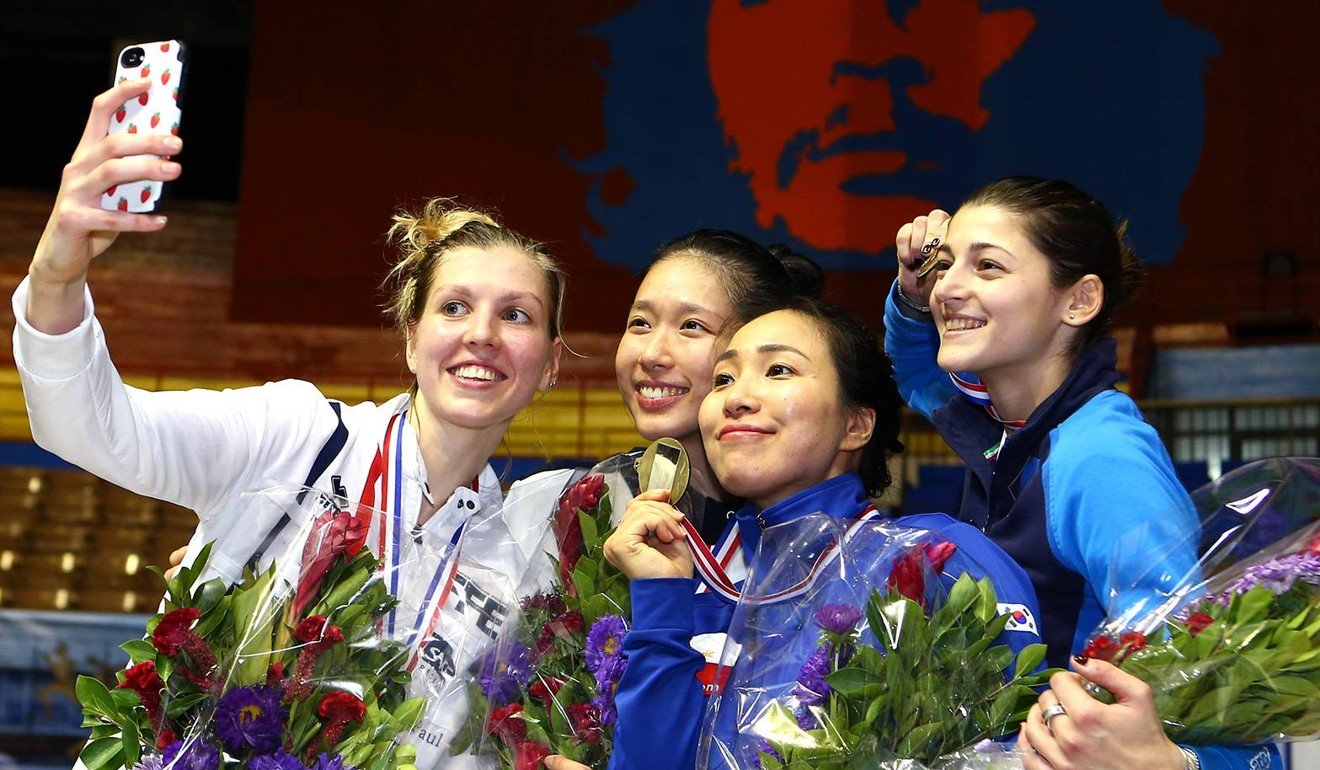 Cuban Ivan Silva won the silver medal today in the individual event of the 2018 Judo World Championships Seniors held in Baku, Azerbaijan, after losing in the final of the 90 kilograms division to Spanish Nikoloz Sherazadishvili.

The Georgian –born athlete and number third in the universal ranking needed the golden score to beat Silva and thus became the first Spanish man to win the world title in judo.

The bronze medals went to Japanese Kenta Nagasawa and French Axel Clerget, the latter was Silva´s victim in semifinals.

This is, so far, Silva´s best performance in the international arena, while the also Cuban Asley Gonzalez, London 2012 Olympic silver medalist and 2013 world monarch, ranked seventh when losing to German Eduard Trippel (5th) in the repechage.

Cuba´s other best performance so far in this major tournament is the 5th seat achieved by Maylin Del Toro in the women´s 63 kg division.

Women Kaliema Antomarchi (78) and Idalis Ortiz (+78) and man Andy Granda (+100) will debut for Cuba today and tomorrow while the team mixed event will be on Thursday.

After these results, the Caribbean island ranks eighth in the standings, with a silver medal, a fifth and a seventh place.

At least 24 people died and 53 were injured Saturday when gunmen disguised as soldiers opened fire on an elite military parade in the southwestern Iranian city of Ahvaz.

State media said at least 24 people, including civilians, soldiers, a woman, and a child, died when at least four assailants dressed in Iranian military attire opened fire on the parade from a nearby park in an assault that lasted around 10 minutes.

"Children and journos among the casualties. Iran holds regional terror sponsors and their US masters accountable for such attacks. Iran will respond swiftly and decisively in defense of Iranian lives," he added.

Two of the alleged terrorists were killed by security forces while two others were detained, according to the same sources.

Iran's regime was staging military parades across the country in commemoration of the Iran-Iraq war (1980-88).

Ahvaz, located near the Iraqi border in Khuzestan province, is a sprawling city that was devastated during the conflict.

Attacks inside Iran are not common, even though extremist groups are known to engage the troops near its borders with Pakistan and Iraq.

The last major terror attack in the country occurred in June 2017 on the Iranian parliament in Tehran, which was claimed by the Islamic State terror organization, and in which 17 people died and more than 50 were wounded.

Battling unseasonably chilly conditions, Juan Miguel Echevarria followed up on his breakthrough performance in Stockholm with a commanding performance at the 57th edition of the Golden Spike, an IAAF World Challenge Meeting, in Ostrava, Czech Republic on Wednesday (13).

The 19-year-old emerged as one of the meeting’s primary attractions after his wind-assisted 8.83m leap in the Swedish capital, and he lived up admirably to the expectations heaped upon him over the ensuing three days.

He passed on his fourth jump, hit 8.54m again in round five before ending the night, and the meeting, with a dazzlingly long foul. The crowd cheered, and he bowed, a post-meet ritual we may be getting used to.

“All my attempts were very consistent and seeing all the people cheering for us made me really happy, their support and interest in the long jump is great,” said the young Cuban, whose previous lifetime wind-legal best was 8.53m set late last month in Rome. What’s next?

“Being the world leader is strange to me because I’m still so young. I think I have a lot more ahead of me. People are already asking about breaking the world record. I can’t say if that can happen this year or in the coming ones, but I believe it is possible though.”

Meanwhile, as a chill descended rapidly on Mestsky Stadium, the host venue of the IAAF Continental Cup Ostrava 2018 in September, the high jump rivalry between Qatari Mutaz Barshim and Danil Lysenko offered another dramatic chapter. 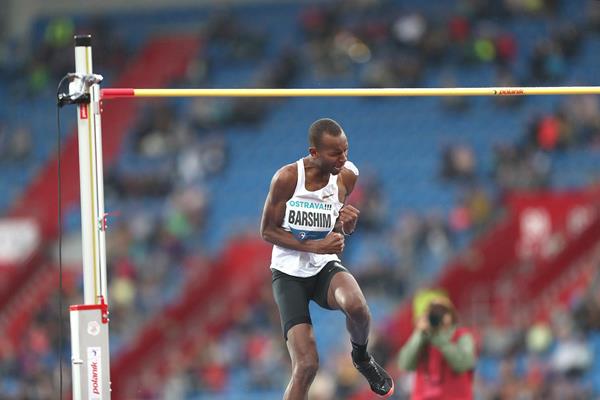 Lysenko, competing as an authorised neutral athlete, took command after a first attempt clearance at 2.34m, a meeting record and season’s best for the 21-year-old world indoor champion. Barshim missed, passed to 2.36m, and missed again. Lysenko went clear on his second try, forcing Barshim up against a wall as the bar was raised to 2.38m with just one jump left.

After a miss by Lysenko, Barshim prepped by first quietening the raucous crowd behind him, then leading them in a slow, steady clap. As the tempo increased and fuelled by the make-or-break pressure, Barshim confidently bounded across the apron, lifted powerfully and sailed clear, punching at the darkening skies through the misty rain for added effect as he bounced off the landing pit.

The highlight on the track came in the Zatopek memorial 3000m where 18-year-old Ethiopian Selemon Barega won his third race of the season in as many appearances.

In style and fashion similar to his world-leading 5000m run in Stockholm last Sunday, Barega again out-sprinted Birhanu Balew of Bahrain en route to a 7:37.53 personal best. Balew was a couple steps behind in 7:38.25 with Ethiopian Haile Tilahun third in 7:38.55. The first six across the line all clocked lifetime bests.

Elsewhere on the middle distance programme, Norah Jeruto took a clear victory in a largely solo effort in the women’s 3000m steeplechase in 9:11.33, clipping more than six seconds from the meeting record set by Milcah Chemos five years ago. Ugandan Peruth Chemutai was second in 9:16.89, an improvement of more than six seconds for the rising 18-year-old talent. 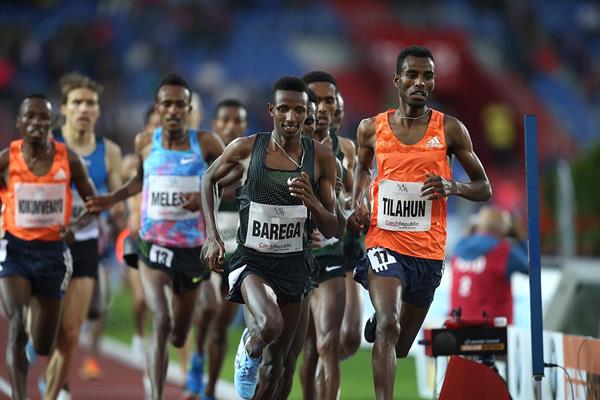 Likewise in the 1500m where Gudaf Tsegay, running alone over the final lap, won convincingly in 4:02.45 to collect her second straight victory over the distance this season and for the second consecutive year in Ostrava. Sarah McDonald of Great Britain was second in 4:04.41 and Czech Simona Vrzalova third in 4:04.80, lifetime bests for both.

The focus in the women’s 800m was on world 1500m record-holder Genzebe Dibaba but the Ethiopian was never really in the chase. Instead, victory went to Moroccan Rababe Arafi, who broke from the field with 220 metres remaining to finish unchallenged in 1:59.20. Noelie Yarigo of Benin was second in 2:00.85 with Dibaba a distant fourth in 2:01.51. 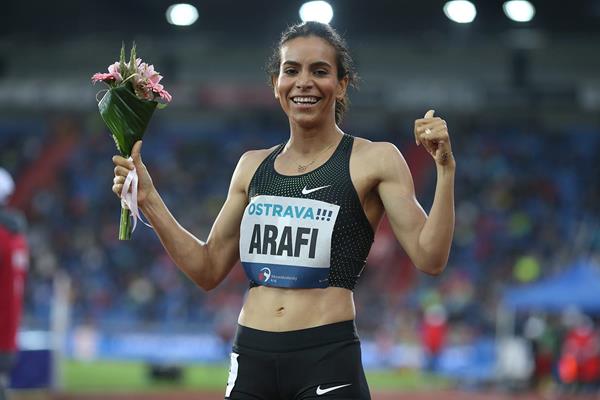 Back on the infield, another meeting record came courtesy of world champion Tom Walsh in the men’s shot put which witnessed yet another thrower join the 22-metre club. That was Poland's European silver medallist Michal Haratyk, who hit a national record of 22.08m in round three. His lead, however, didn’t last long as Walsh responded with a 22.16m effort in the same round to secure the win.

Ryan Crouser struggled, reaching 21.43m in his only measured throw of the night, good enough for fourth and breaking his streak of 22-metre competitions.

Jakub Vadlejch made the best of the uncooperative conditions to win the javelin with an 88.36m best from the second round. Olympic champion Thomas Rohler performed admirably as well, finishing second with an 87.28m effort from round four.

The best sprint performance came in the men’s 400m where Abdalelah Haroun beat the cold and a solid field in 44.63, nearly a second clear of 2012 Olympic silver medallist Luguelin Santos, who clocked 45.43.

World champion Justin Gatlin dominated the 100m, taking a decisive win in 10.03, a season’s best for the 36-year-old. Akani Simbine of South Africa was a distant second in 10.13, 0.02 ahead of Mike Rodgers of the US.

Over the half lap, Canadian Aaron Brown ended world champion Ramil Guliyev’s brief win streak, winning in 20.05 ahead of Jereem Richards and Guliyev who each clocked 20.09.

The evening-capping 200m was a skirmish nearly to end between world champion Dafne Schippers and Murielle Ahoure. The latter held a slight lead midway through the final straight before the Dutchwoman pulled away for the win, 22.52 to 22.60.

Elsewhere, Pascal Martinot-Lagarde of France won the 110m hurdles in 13.45, just ahead of Brazil’s Gabriel Constantino, who clocked 13.48.

Pole Pawel Wojciechowski secured his first win of the outdoor season after a second-attempt clearance at 5.65m. After world champion Sam Kendricks bowed out at the same height, Wojciechowski went on to clear 5.75m before topping out at 5.86m.

The meeting ended with a farewell tribute to 2003 world champion Kim Collins, who at 42 will retire at the end of the season. Earlier in the event, the popular sprinter won a special section of the 100m contested by sprinters above the age of 30, clocking 10.41.