Madonna has claimed the London Palladium tried to "censor" her by cutting short a concert after she ran over her curfew on Wednesday.

The singer was performing her Madame X show when the lights and sound were switched off and the curtain closed as she went past her 23:00 GMT deadline.

Madonna shared a video on Instagram, which showed her trying to sing her final song in front of the curtain.

The Palladium had warned her not to break the strict curfew.

The pop superstar is in the middle of a residency at the venue.

She wrote: "It was 5 minutes past our 11:00 curfew, we had one more song to do and The Palladium decided to censor us by pulling down the metal fire curtain that weighs nine tonnes.

"Fortunately they stopped it half way and no one was hurt. Many thanks to the entire audience who did not move and never left us. Power to the people!!"

The venue denied that staff had used the fire curtain, but did not directly comment on the show being cut short.

"Contrary to a number of reports, at no point during last night's performance did staff at The London Palladium pull down, or attempt to pull down, the Iron Fire Curtain," a spokesman said.

The video footage appeared to confirm that it was the main cloth curtains which were used closed, rather than the iron fire curtain. 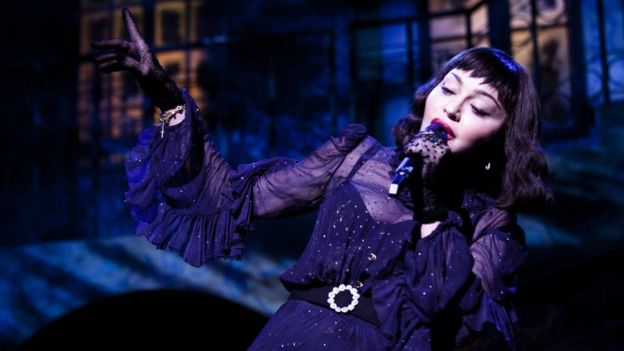 Madonna emerged from the closed curtain with her backing dancers as the crowd chanted her name. She performed her final song, I Rise, with the house lights turned up and her microphone switched off.

"I've been warned by Westminster council," she told the audience during the first night at the London venue last week, adding that she knew an "iron curtain" would fall over the production if she ran late.

Previous shows in the US have run considerably later than the London dates, with fans often kept waiting for several hours.

One fan wrote on Twitter: "Madonna just got cut off mid song by the Palladium curtain dropping and the lights coming up as she overran the curfew. Glorious moment. She finished the show a cappella in front of the curtain like a champ!"

Another said: "So not only did we finally see the utterly iconic Madonna live but she missed the curfew and the Palladium shut the lights and sound off. As the curtains fell, Madonna and her dancers stormed back onto the stage and sang I Rise a cappella backed by the audience."

Madonna has previously cancelled 10 of the 93 dates on the Madame X tour due to injury.

More in this category: « Cuba and Vietnam strengthen friendship at Int'l Book Fair Havana to celebrate the 2020 Chopin Year »