A man has been arrested on suspicion of battery after allegedly punching Brad Pitt in the face at the premiere of Maleficent in Los Angeles.

Ukrainian reporter Vitalii Sediuk - who is known for pranking celebrities - was reportedly seen jumping over a barrier, hugging and then striking the star.

The 25-year-old was wrestled to the floor by bodyguards before being led away in handcuffs by police.

Pitt, who had been signing autographs at the time, was not seriously hurt.

A spokesperson for the film company said: "This was an unfortunate and inappropriate incident that is being investigated by the Los Angeles Police Department."

"The officers who were handling him said it looked like [the attack] was intentional, but at this point, it remains to be determined," Sgt Leonard Calderon told Reuters.

Mr Sediuk has a history of red carpet stunts and pranking celebrities.

Last week, he hit headlines after he crawled under the skirt of Ugly Betty actress America Ferrera at the Cannes Film Festival. 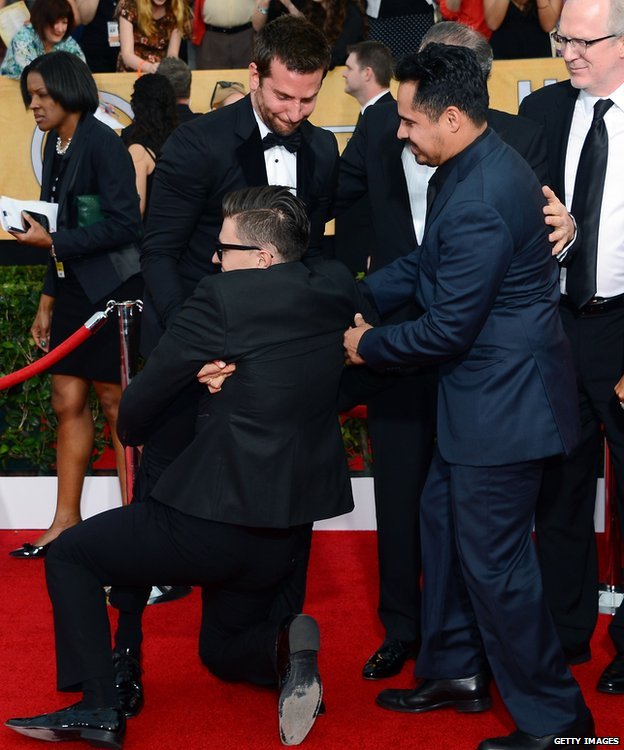 Sediuk forced a hug on Bradley Cooper at the SAG Awards

At the SAG Awards in January he was seen on his knees hugging Bradley Cooper's crotch - a stunt he also pulled on Leonardo DiCaprio at the Santa Barbara Film Festival in February.

Last year, he crashed the stage during the Grammys, running up to Jennifer Lopez and Pitbull to accept Adele's award for best pop solo performance before the singer reached the stairs.

He was charged with entering a performance area and interfering with the ceremony but was not jailed.

In 2012, Mr Sediuk also received a slap on the face from actor Will Smith after he tried to kiss him on the lips while on the Men In Black 3 red carpet in Moscow.