The FBI says it is gathering information about an alleged incident involving Brad Pitt and his children aboard a private flight last week.

It said it was evaluating whether to launch an investigation.

Jolie has asked for physical custody of the couple's six children, asking the judge to give Pitt visitation rights.

The FBI told the BBC: "In response to your inquiry regarding allegations within the special aircraft jurisdiction of the United States; specifically, an aircraft carrying Mr Brad Pitt and his children, the FBI is continuing to gather facts and will evaluate whether an investigation at the federal level will be pursued."

Pitt released a statement to People magazine after Jolie filed for divorce, saying he was "saddened", and adding: "What matters most now is the well-being of our kids. I kindly ask the press to give them the space they deserve during this challenging time." 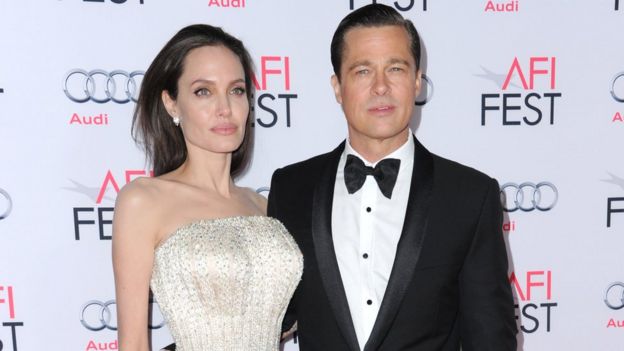 Jolie had filed for the dissolution of their marriage / AP

Jolie's lawyer, Robert Offer, said the decision to divorce had been made "for the health of the family".

Los Angeles County Department of Children and Family Services said it could not confirm or deny whether it was investigating Pitt because of confidentiality laws.

Los Angeles Police Department (LAPD) has said it is not investigating actor Brad Pitt in connection with reports of allegations regarding his children, following claims they were looking into the matter.

They told the BBC: "The LAPD is not handling any report or allegations into child abuse for Mr Brad Pitt."