Recommended:
Fidel Castro, Under the Urgency of Prophets
BEING ANTI-IMPERIALIST: Without anti-imperialism, there’s no freedom, there’s no independence
Who are Interested in Making the World Believe that There’s a Climate of Insecurity and Violence in Cuba?

Santiago de Cuba, Jul 3 (Prensa Latina) The 37th International Festival of the Caribbean began today in this city, with an extensive cultural and academic program to strengthen the relations between the regional countries, based on respect to their roots and spirituality.

The opening ceremony will take place at the Theater Heredia, with expressions of the people's traditional culture and the participation of representatives for more than 21 Caribbean countries, Latin America and Europe that will take part in this event, also called Fiesta del Fuego (Celebration of Fire).

In this 37th edition, the island of Bonaire will receive the greatest honor, as special guest that will take the opportunity to show the richness and diversity of its culture, through music, a carnival, cuisine traditions, poetry, theater and fine arts.

The festival will be on until Sunday, organized by the house of the Caribbean as one of its main events in 35 years.

As an initiative of founder-director Joel James, this celebration has been possible, thanks to the collaboration by the Culture Ministry and other Cuban and foreign institutions.

During the opening ceremony of the Press Center at the Patrimonial Corridor Las Enramadas, the participants will make statements against the internal interferance policies of US President Donald Trump.

Ariana Grande has resumed her tour, just over two weeks after the terrorist attack at her Manchester Arena concert.

Twenty-two people were killed and 116 injured in a suicide bombing after her gig on 22 May.

"First show back tonight. Thinking of our angels every step of the way. I love you with all my heart," the singer wrote on Instagram.

"Grateful for and incredibly proud of my band, dancers and entire crew. I love you I love you."

Security was tight at the show, with some fans uploading videos of themselves being searched as they went in.

French police had announced prior to the gig that security would be heightened because of the show's "powerful symbolic context".

Roads surrounding the venue were blocked off to traffic hours before the event started. Security staff searched all bags and police with sniffer dogs patrolled the venue.

Wednesday evening's concert at the AccorHotels Arena in Paris marked Ariana's first full-length solo show since the attack and the resumption of her world tour.

But her first live performance was on Sunday, when she appeared at One Love Manchester, a benefit concert to raise money for the victims of the suicide bombing and their families. 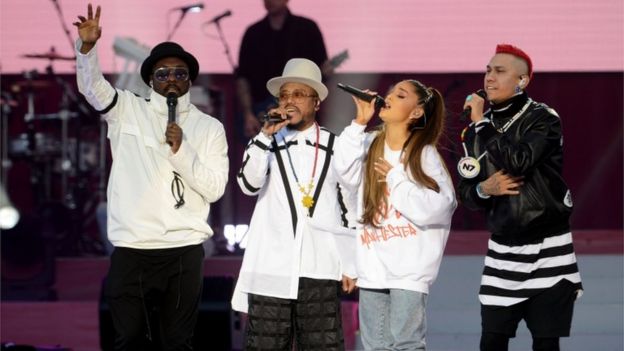 Grande had suspended her Dangerous Woman tour after the Manchester attack - cancelling dates that had been scheduled in London, Poland, Germany and Switzerland.

Resuming her tour on Wednesday, the singer rattled through hits including Side To Side, Bang Bang, Into You and Problem.

Ariana's boyfriend Mac Miller joined her on stage to duet with her on Dang! and The Way.

The crowd almost drowned out her vocals as they sang along to One Last Time - the song which fans have adopted as a tribute to the victims.

The single is likely to re-enter the official chart on Friday and Grande has announced she will donate proceeds to the Red Cross's Manchester Emergency Fund.

She also added Somewhere Over the Rainbow to her usual set list for the Paris show - a song she performed at the end of the benefit concert.

Analysis: How Ariana stood up against hate 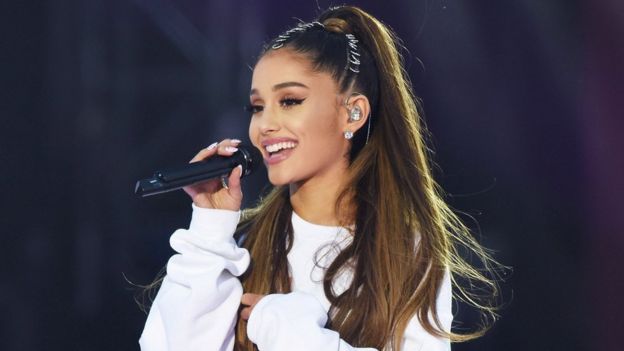 Ariana wore a One Love Manchester sweater while she performed / Reuters

On the morning of 23 May, BBC Radio 4's Today programme was filled with wall-to-wall coverage of the Manchester attack as accounts of what had happened the night before streamed in.

Early in the programme, the presenters confessed they hadn't previously heard of Ariana Grande - perhaps unsurprising given the lack of overlap between her target audience and Today's.

But less than two weeks later, a peak of 14.5 million people in the UK alone were tuning in to watch her close One Love Manchester with live renditions of One Last Time and Somewhere Over the Rainbow.

It was the highest TV audience of the year so far and broke iPlayer records for the most watched live non-sporting event ever.

As the concert drew to a close, it was hard to find anyone who wasn't praising Ariana for how she had handled the aftermath of the atrocity. 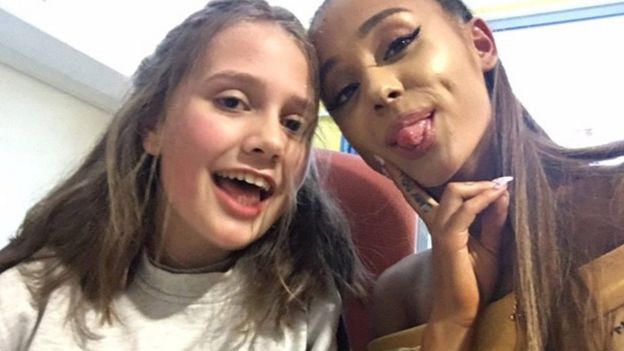 The singer visited fans in hospital. She organised the concert (admittedly with a great deal of help) and released a single to benefit the victims. All in all, she helped raise more than £10m for the Red Cross's Manchester Emergency Fund.

It's easy to assume young pop stars are bubble-wrapped and have all their decisions made for them. Which many are and do.

But few could dispute the grace with which Ariana took control and handled the aftermath of such a horrible event.

Nobody would have blamed her had she needed to take some time out after experiencing something so traumatic.

Having to process the grief of a terrorist attack happening on one of your tour dates is something many wouldn't even be able to begin to get their heads around.

But, as her manager Scooter Braun said at the benefit gig, Ariana recognised the importance of carrying on in an act of defiance and unity.

"Hatred will never win, fear will never divide us, because on this day we all stood with Manchester," he said.

Grande was praised from all quarters after One Love Manchester.

Ellie Goulding called her a "legend" while Pixie Lott said she was "a true angel".

Even Piers Morgan, who had previously criticised her for flying back to the US immediately after the attack, was won over.

Ariana herself told of how she'd met with the mother of Olivia Campbell-Hardy, one of the victims, who told her to stop crying because her daughter wouldn't have wanted it.

Instead, she encouraged Ariana to get up on stage and simply play the hits. And that's precisely what she did.

The singer now has a certain bond with the city of Manchester, and the affection she expressed to the city at the concert was mutual. 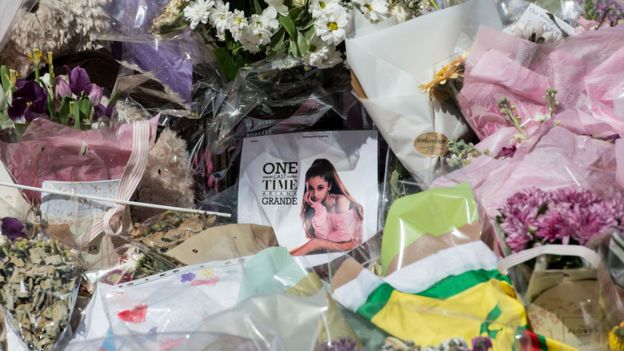 Flowers left in memory of those killed / Getty Images

Ariana has live dates scheduled in Portugal, Spain and Italy later this month, before she moves on to the South American leg of her tour.

It's likely that no matter wherever she goes now, geographically or professionally, she'll be greeted with a new-found respect for how she dealt with such an unspeakable tragedy.

Havana, May 26 (Prensa Latina) With a concert next Thursday, Cuban artists will pay tribute to legendary British band The Beatles on the 50th anniversary of the recording of the LP Sgt. Pepper's Lonely Hearts Club Band, considered one of the best and mostly sold in history.

The concert will be at 18:00 local time at Havana's John Lennon Park, with the participation of 7 national bands.

The tribute to the young guys from Liverpool is organized by Cuban musician and composer X Alfonso, musicologist Guille Vilar and the Ministry of Culture.

Formed originally by John Lennon, Paul McCartney, George Harrison and Ringo Starr, The Beatles is one of the most acclaimed bands of all times, with many followers around the world.

Released on 1 June 1967, Sgt. Pepper's Lonely Hearts Club Band is their eighth album, with which they won four Grammy Awards in 1968.

The LP sold 32 million and drew favorable reviews from the critics and the public.

For its quality and innovation, specialized Rolling Stone magazine ranked it number one on its list of the 500 best albums.

Havana, May 25 (Prensa Latina) Young singers from the Teatro Lirico Nacional de Cuba (National Lyric Theater of Cuba) will perform on Friday a program that highlights their vocal skills.

The concert 'Pensado para tres' (Intended for Three), directed by Helson Hernandez, gathers for the first time the three singers that have different musical experiences.

The program will be dedicated to the 55th anniversary of the company, which has a repertoire of more than 40 operas and 25 operettas, Spanish and Cuban.

Teatro Lirico Nacional de Cuba was founded on September 11th, 1962, although the first lyric performances in Cuba were held in 1776, in which the work 'Diddone abbandonata', written by Metastasiowas, was premiered.

The Rolling Stones have confirmed their return to the European tour circuit, setting a run of dates for this fall, kicking off in Hamburg, Germany on September 9.

The No Filter tour will also take the legendary rockers through Italy, Spain, Holland, France and more, rounding out with two shows at Paris’ U Arena in October.

See the full tour schedule below. All ticketing information can be found here.

Students and teachers of ballet schools from various countries will share experiences from today in Cuba on the artistic education and the suitable development of techniques.

The International Meeting of Schools for Ballet Teaching is an event unique in the world and on this 23th time it will be held in Havana until April 19th.

The meeting will be opened at the National Theater with the Cuban School Fernando Alonso performing a piece of the classic El Corsario.

Director of the meeting Ramona de Saa will give lectures on methodology of teaching of the Cuban ballet school, along with physical trainer Jose Candia and historian of the National ballet of Cuba (BNC) Miguel Cabrera.

This 23rd event will be dedicated to historical leader of the Cuban Revolution Fidel Castro, who died last November, and who, according to De Saa, played a key role in the development of ballet in Cuba and gave the Cuban National School Fernando Alonso its current headquarters.

Havana, Apr 4 (Prensa Latina) Italian orchestra director Francesco Belli will direct the Cuban National Symphony Orchestra (OSN) next Sunday, in a concert to be performed at the Covarrubias Hall of the National Theater of Havana, in which they will perform works written by famous authors like Beethoven, Schumann and Stravinski.

The concert will receive the debut of Italian young violoncello player Elena Cappelletti, for the first time to perform in Cuban theaters, invited by the OSN.

According with the program, Cappelletti will be the soloist of the concert for violoncello, by Schumann, one of the masterpieces written by the composer towards the end of his career in a stage of rest and happiness, while he was residing in the German city of Düsseldorf.

The repertoire of the concert will be completed by the Egmont Overture, by Beethoven, and The Bird of Fire, of Stravinski, based on Russian folk histories on the magic bird of intense sheen that both a blessing as much as a curse for its captor.

With a jam session that summoned guest artists, Havana World Music Festival came to an end on Sunday at the Factory of Cuban Art (FAC), in this capital.

From Thursday, March 23rd, the FAC and the Metropolitan Park of Havana were the stages for bands of a wide rande of musical trends from around the world, like Norwegian bands Lady Moscow and Madcon, to show their art.

Cuban singer-songwriter David Torrens and dance popular music band Havana D'Primera were among those who put rhythm to the nights of the Metropolitan Park of Havana.

According to Eme Alfonso, the Festival's artistic director, this fourth edition of the event has consolidated the Festival.

Alfonso aspires to turn the event into a reference for Cuba and other countries of Latin America, where there are very few festivals dedicated to musical diversity.

In addition to the concerts, the event included exhibitions, art performances, workshops and conferences on the current tendencies of the music on a global scale.