Researchers have discovered the earliest known ancestor of humans - along with a vast range of other species.

They say that fossilised traces of the 540-million-year-old creature are "exquisitely well preserved".

The microscopic sea animal is the earliest known step on the evolutionary path that led to fish and - eventually - to humans.

Details of the discovery from central China appear in Nature journal.

The research team says that Saccorhytus is the most primitive example of a category of animals called "deuterostomes" which are common ancestors of a broad range of species, including vertebrates (backboned animals).

Saccorhytus was about a millimetre in size, and is thought to have lived between grains of sand on the sea bed. 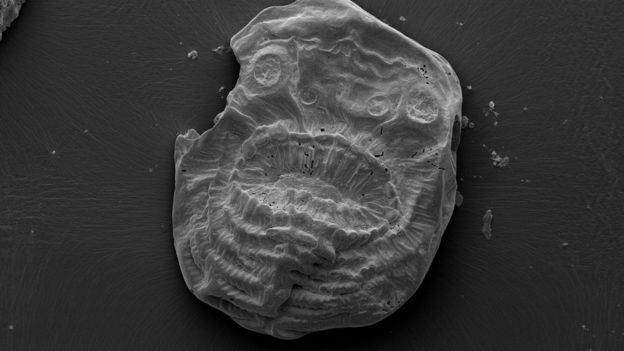 Saccorhytus was also covered with a thin, relatively flexible skin and muscles. It probably moved around by wriggling / Jian Han, Northwest University, China

The researchers were unable to find any evidence that the animal had an anus, which suggests that it consumed food and excreted from the same orifice.

The study was carried out by an international team of researchers, from the UK, China and Germany. Among them was Prof Simon Conway Morris, from the University of Cambridge.

He told BBC News: "To the naked eye, the fossils we studied look like tiny black grains, but under the microscope the level of detail as jaw-dropping.

"We think that as an early deuterostome this may represent the primitive beginnings of a very diverse range of species, including ourselves. All deuterostomes had a common ancestor, and we think that is what we are looking at here."

Degan Shu, from Northwest University in Xi'An, Shaanxi Province, where the fossils were found, said: "Saccorhytus now gives us remarkable insights into the very first stages of the evolution of a group that led to the fish, and ultimately, to us."

Until now, the deuterostome groups discovered were from between 510 to 520 million years ago. These had already begun to diversify into not just the vertebrates, the group to which we and our ancestors belong and animals such as starfish and sea urchins.

Because they looked so different from one another, it was difficult for the scientists to determine what an earlier, common ancestor might have looked like.

The study suggests that its body was symmetrical, which is a characteristic inherited by many of its evolutionary descendants, including humans.

Saccorhytus was also covered with a thin, relatively flexible skin and muscles, leading the researchers to conclude that it moved by contracting its muscles and got around by wriggling.

The researchers say that its most striking feature is its large mouth, relative to the rest of its body. They say that it probably ate by engulfing food particles, or even other creatures.

Also interesting are the conical structures on its body. These, the scientists suggest, might have allowed the water that it swallowed to escape and so might have been a very early version of gills.

More in this category: « Nasty or nice? Study links personality to brain shape Mission To Build Better Tomatoes Has Begun »