NASA's Cassini spacecraft made new pictures of Saturn and the famous storm at its north pole on the second day of the planet's solstice, NASA reported.

Cassini observed how a huge storm has appeared and encircled Saturn over the last seven years of its mission. Scientists believe that such storms are influenced by seasonal effects of sunlight on Saturn's atmosphere.

"Reaching the solstice, and observing seasonal changes in the Saturn system along the way was a primary goal of Cassini's Solstice Mission," NASA's website reported.

Basically, the spacecraft was able to follow the complete change of all seasons on Saturn, with the whole planet's system dramatically changing with the start of summer and the end of winter.

"The Saturn system undergoes dramatic transitions from winter to summer, and thanks to Cassini, we had a ringside seat," Dr. Linda Spilker, the scientific leader of the mission, was quoted as saying. 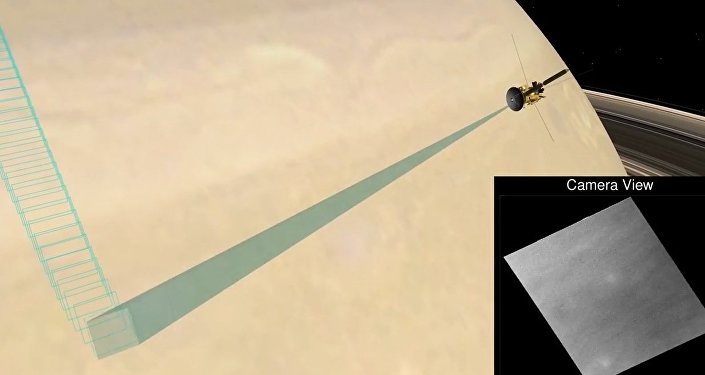 Cassini Space Probe Captures Saturn's Swirling Vortex in Extraordinary New Video / © Photo: Youtube / NASA Jet Propulsion Laboratory
Many of the things, which scientists know now, could have never been registered by Cassini if NASA had not decided to extend the mission. For example, five years ago, Cassini first "saw" how Saturn's atmosphere was covered with a giant hurricane at the beginning of autumn and how a haze of hydrocarbons appeared in the planet's atmosphere.

The main achievement of the Cassini mission was the discovery that geysers located on Saturn's sixth moon — Enceladus — can ejecthot water that is generally suitable for the birth and maintenance of life. This discovery urged NASA to consider sending another mission to Saturn and Enceladus in the future.

The Cassini space mission was launched in October 1997 and arrived at Saturn in July 2004. The mission has seen two extensions and is set to end on September 15, 2017. Its observations have generated hundreds of scientific articles.

More in this category: « Sleep loss affects your waistline Not all that glitters in gold, but this is a spectacular environment (+ PHOTOS) »