A Kiwi professor has developed a new treatment that has already saved one man's life and could possibly help thousands more defeat mesothelioma – an aggressive cancer caused by exposure to asbestos. The disease results in death shortly after diagnosis.

Asbestos was once hailed as a miracle mineral, resistant to heat. Prolonged inhalation of asbestos fibers, however, is notorious for causing lung cancer and mesothelioma.

These cancers differ in some physical characteristics and require different methods of treatment. The incidence of mesothelioma is much smaller than that of lung cancer, with mesothelioma almost exclusively the result of asbestos exposure. Mesothelioma develops as an interconnected network of many tumors over a large area of tissue, according to mesothelioma-help-network.com.

Over time, the boundaries between healthy and cancerous tissue become indistinguishable. As a result in many cases, removing malignant tissue becomes next to impossible, because of the number of masses and the size of the affected area. With lung cancer, tumors grow as distinct, individual masses, and boundaries of these masses are very clear. Exactly because the masses are so distinct, when caught early enough, they can be surgically removed.

Health concerns related to asbestos exposure have been circulating for centuries. Greek historian Strabo mentioned a "sickness of the lungs" in slaves weaving asbestos into cloth. Roman historian and naturalist Pliny the Elder also attempted to raise awareness of the "disease of slaves" who mined asbestos and inhaled its hazardous fibers. Embalmed bodies of Egyptian pharaohs were wrapped in asbestos cloth to protect them from deterioration. Australia has the world’s highest incidence of malignant mesothelioma per capita, with over 700 new cases diagnosed each year, caused by the widespread use of the carcinogen, according to Asbestos Diseases Research Institute (ADRI) in Australia. Over 10,000 Australians have died since the early 1980s from mesothelioma, with more than 25,000 expected to die over the next four decades, ADRI says.

Most people with mesothelioma in Australia have been exposed to asbestos in their workplace. The disease is most common among miners who inhaled or ingested asbestos fibers, or were exposed to airborne asbestos dust and fibers. Common mesothelioma symptoms, such as chronic coughing, chest pain and difficulty breathing can be confused with innocent respiratory ailments. While there's a long time between asbestos exposure and the occurrence of mesothelioma (with the ‘lag’ time usually between 20 and 40 years), a median survival time after the diagnosis is made is only between 9 and 12 months, according to ADRI.

New Zealander Dr Glen Reid, an associate professor at the University of Sydney Medical School, has been burning the midnight oil for three years conducting research into malignant mesothelioma, which is caused only by asbestos exposure. Its treatment is difficult because, as ADRI notes, mesothelioma is ''intrinsically resistant'' to most of the traditional chemotherapeutic drugs. 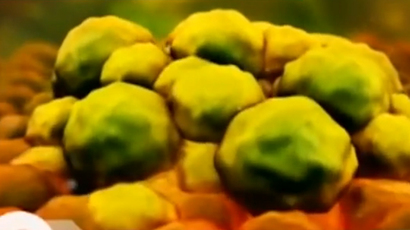 “We have found an amazing inhibition of tumor growth. The results were far in excess of what have been seen with other experimental therapies in this model, and we are very excited about it,” ADRI senior researcher Dr Reid said.
Putting the microRNA inside nanocells was pretty much like using a Trojan horse, Dr Reid told ABC Australia.

"A nanocell is a delivery vehicle. You can package basically anything in there that you like, so a chemotherapy drug — or in our case a mini-gene — and then it's injected into the body." Although the groundbreaking testing treatment is still underway, a trial on one Sydney man has already proved a success. Bradley Selmon, 51, has been exposed to asbestos for years during his work as a plumber. He was diagnosed with mesothelioma in 2013 and decided to enter Dr Reid's trial after chemotherapy treatment proved to be ineffective. In two months, his tumour has practically disappeared. Selmon was one of 10 patients in a phase-one clinical trial of the new treatment and was the only patient to respond so well. The other nine patients in the trial have either remained stable or continued to decline. Scientists from the Chris O'Brien Lifehouse Centre have published Selmon's case report.

"The pain stopped. All of a sudden I could yawn without restriction. Now, I can go bushwalking and walk up steep steps - anything I want to do,'' the lucky patient told the New Zealand Herald.

Mr Selmon's oncologist, Dr Steven Kao of the Chris O'Brien Lifehouse cancer center in Sydney, said the new treatment ''has the potential for a paradigm shift in the management of other treatment-resistant tumors,'' according to the newspaper.

Asbestos is present in an array of construction and household goods and products that people use in their daily routine. The mineral is used in ships, trains, steam boilers, car brake linings, fire retardant coating for pipes and buildings, clothing, vinyl floor tiles, cement pipes, gaskets and automatic transmission components just to name a few. It's also a component in ceiling insulation, roofing and flooring. There are currently 40 countries that have completely banned asbestos, including most countries in the EU. Unlike Australia, where asbestos was totally banned in 2003, America still remains one of the few developed countries that hasn’t completely banned asbestos

The Asbestos Nation campaign, launched “to educate and mobilize Americans about the ongoing dangers of asbestos” notes that EWG Action Fund’s estimates are still too low, because the deaths of patients with symptoms of pneumonia or other respiratory diseases may be mistakenly attributed to those diseases, or to lung fibrosis of unknown origin.

“As shocking as these figures are, they may be too low,” said Dr Richard Lemen, an epidemiologist who served as assistant surgeon general during the Clinton administration. “The report did not estimate deaths from other asbestos-related diseases,” he added.