Scientists in India and Pakistan say higher temperatures were just one factor behind the recent heatwaves and other causes have yet to be established.

They say low air pressure, high humidity and an unusually absent wind played key roles in making the heat unbearable but they do not know why such conditions prevailed at this time of the year.

The temperature forecast for the heatwave peak in Karachi last week was 43C, according to meteorologists in Pakistan.

The prediction was accurate but other factors made the heat feel unbearable, they say.

More than 1,000 people have died in Pakistan in the worst heatwave in three decades.

In neighbouring India, the official death figure exceeded 2,000, although reported cases were put at more than 3,000. 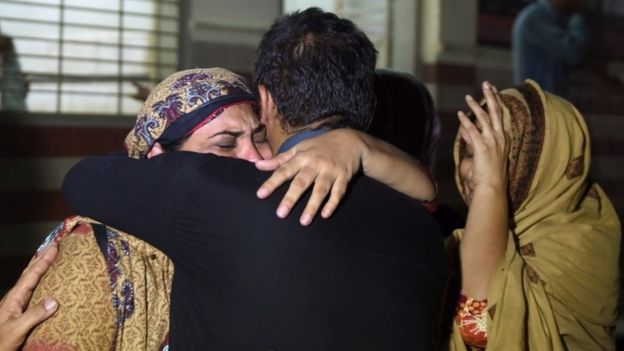 More than 1,000 people have died in Pakistan in the worst heatwave in 30 years

"In Karachi, it felt like 49C and that is what we call the heat index," said Muhammad Hanif, director of Pakistan's National Weather Forecasting Centre.

"The heat index was higher than the actual temperature because air pressure was quite low and the humidity was very high in that area.

"The low pressure, which is very unusual in the month of June in that part of Pakistan, totally cut off the sea breeze and made the heat unbearably high."

"Coastal regions (ease) the heating process by settling in the sea breeze during late evenings which minimises the accumulated stress on the human body," said LS Rathore, director general of the Indian Meteorological Department.

"This year, that did not happen, and what we had was basically a prolonged continental heating."

The climate change chief at the Indian Institute of Tropical Meteorology, R Krishnan, said there was a limited scientific explanation for this.

"The sustained warming persisting for several days is linked with atmospheric circulation changes.

"We don't know what is driving those circulation patterns which are producing some kind of descending motion and maintaining the warm conditions." 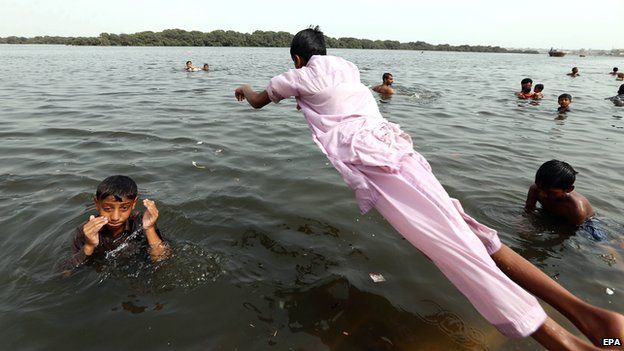 People jump in the water to cool off in Karachi

"The vortex (low pressure) area that had developed in the North Arabian sea at first appeared in the upper atmosphere," he said.

"A few days later it descended on the surface and was converted into low pressure area.

"It was this low air pressure and high humidity that made the heat unbearable in Karachi and people felt as if it was 49C while the actual temperature was 43C.

"Whereas in the southern part of Pakistan, the recorded temperature was 47C and yet people felt as if it was just around 41C because that part had high air pressure and low humidity and therefore no one died there.

"What has happened in Karachi has been happening increasingly in several locations in South Asia for the past few years but we don't know what causes it and the region has not taken any initiative in understanding it so far."

Indian climatologist Krishnan of IIMT agreed that much remained to be understood.

"We need to find out why these unusual circulations happened at this point of time," he said.

"Of course, people have documented by how much the temperature has increased and so on but a lot more fundamental work needs to be done to understand the dynamics of these heatwaves.

"I have asked my colleagues to look into it."

Scientists in the region say climate change has certainly intensified heatwaves in the same way it has accelerated other extreme weather events including floods, droughts, wildfires, among others.

The Intergovernmental Panel on Climate Change, the UN body on climate science, has long warned that heatwaves would become increasingly extreme in South Asia.

"Warming has occurred, at a country scale, across most of South Asia over the 20th century and into the 2000s," reads the fifth assessment report of the IPCC.

"There were more temperature extremes," the report said, putting this statement under a 'high confidence' heading.

"Heatwave frequency has increased since the middle of the 20th century in large parts of Asia."

Scientists say heatwaves have not been given due attention despite that knowledge.

"And that is because it is a slow evolving scenario unlike other fast events like tropical cyclone or flooding," says Qamar Zaman Chaudhry, a climate scientist and special adviser to the World Meteorological Organisation for Asia.

"So, when you have something that evolves slowly, it is not addressed urgently or with seriousness.

"This has been the case with heatwaves in our region."