Recommended:
USA-Blockade Cuba: Fifty-eight Years Later
Hoax against Cuba at a little room of the European Parliament
The need to preserve our essence

The New York Times made a revelation that amazes millions of people.


The Trump Administration decided to expel many seriously ill immigrants from the country who were receiving medical care.

They had requested that, at least, they were moved until the end of their treatments, but they failed.

In a palliative attempt, officials announced that they will only reopen "some" of those requests.

Early last August, the United States Citizenship and Immigration Service (USCIS) reported that it was stopping the deportation of immigrants or their relatives assisted with decisive medical care.

The mentioned agency belongs to the Department of Homeland Security, and sent letters to those who requested relief against expulsion, a step that can be taken every two years.

In these letters, the USCIS warned two things: they would not extend what was requested, and they had to leave the United States within 33 days.

Otherwise, it pointed out, they would be deported, a threat that generated heavy opinions and criticism from medical experts, said the Times.

However, the USCIS reported in a statement that it considers "appropriate" how to limit the program.

The newspaper estimated that the abrupt decision has been executed at a time when Trump takes controversial steps against illegal and legal immigration.

A week ago, 130 senators and Democratic representatives wrote a letter to the interim secretary of National Security, Kevin McAleenan, where they described the measure as "cruel and inhuman."

What are the sufferings of people damaged by Trump's decision?

As it frequently happens, in the United States Donald Trump’s performance is judged again with a bitter and pessimistic tone.

Alarmed White House officials attempt to control the unsteadiness, ignorance, amorality and childish behavior of their president that can cause damages beyond repair.

Several media published that this Wednesday. One of them, The New Herald, wrote an article under the signature of Rosa Townsend.

Another of their concerns revolves about what they call republican plot, where they exonerate the behavior of the leader, nevertheless the great threat it represents to National Security.

They operate under the motto: “It doesn't matter that Trump is crazy if economy goes well and if we can name ultraconservative judges, it doesn't matter while his base of fanatics follow him and that allows us to stay in power.”

The aforementioned journalist adds that while a national debt never seen before is looming, the president refused to integrate the World Trade Organization, (WTO) although, in general, it favors the United States.

With that and other countless tantrums, and impulsive decisions, Trump appears as a president disconnected from reality, reluctant to learn or change his opinion.

Also paranoiac, vengeful and with a huge inferiority complex that tries to be strong. A wayward and ignorant baby sat in the Oval Office.

He was even called “idiot” by his Chief of Staff, John Kelly.

“A boy with a fifth grader understanding” by the Secretary of Defense, John Mattis who frustrated by his ignorance had to explain to him during a meeting of the National Security Council that the North American Army was in South Korea “to avoid the Third World War.”

Due to the characteristics of the leader, now the North American people are even more aware of the dysfunctional government they have.

Although, Trump sustains the approach that true power resides in instilling fear.

In articles published in other media, their authors wonder: who would lead Washington in the event of a serious crisis, or another catastrophic situation?

An erratic, isolated, more paranoiac than never president, while he spends several hours a day to watch television and tweet nonsense.

Journalist Rosa Townsend affirms that a number, every larger of North Americans also wonder: Whose hands are we in?

After 15 years of wars, a majority of US service members are deeply skeptical about America’s foreign interventions. The US should focus on homeland defense and jobs instead of invading and “stabilizing” countries like Afghanistan or Iraq, a new poll shows.

Most active-duty members of the US military would prefer the government to refrain from overseas missions involving so-called nation-building, a number of costly and ambiguous efforts to reconstruct post-war countries, according to a poll run by the Military Times and Syracuse University's Institute for Veterans and Military Families (IVMF).

The survey, described by the Military Times as a first-of-its-kind study, included a question: “How do you view the US government’s continued involvement in nation-building efforts, establishing democracies in the Middle East and North Africa using US military and financial support?”

About 55 percent of service members said they “strongly oppose” or “somewhat oppose” those efforts, while 23 percent responded positively to an idea of carrying out such missions. The remaining 22 percent were either unsure or of no opinion on the issue.

@MilitaryTimes Troops in our survey with .@IVMFSyracuseU said national security should focus on counter-terrorism over foreign aid http://ow.ly/qrEh304tCz1 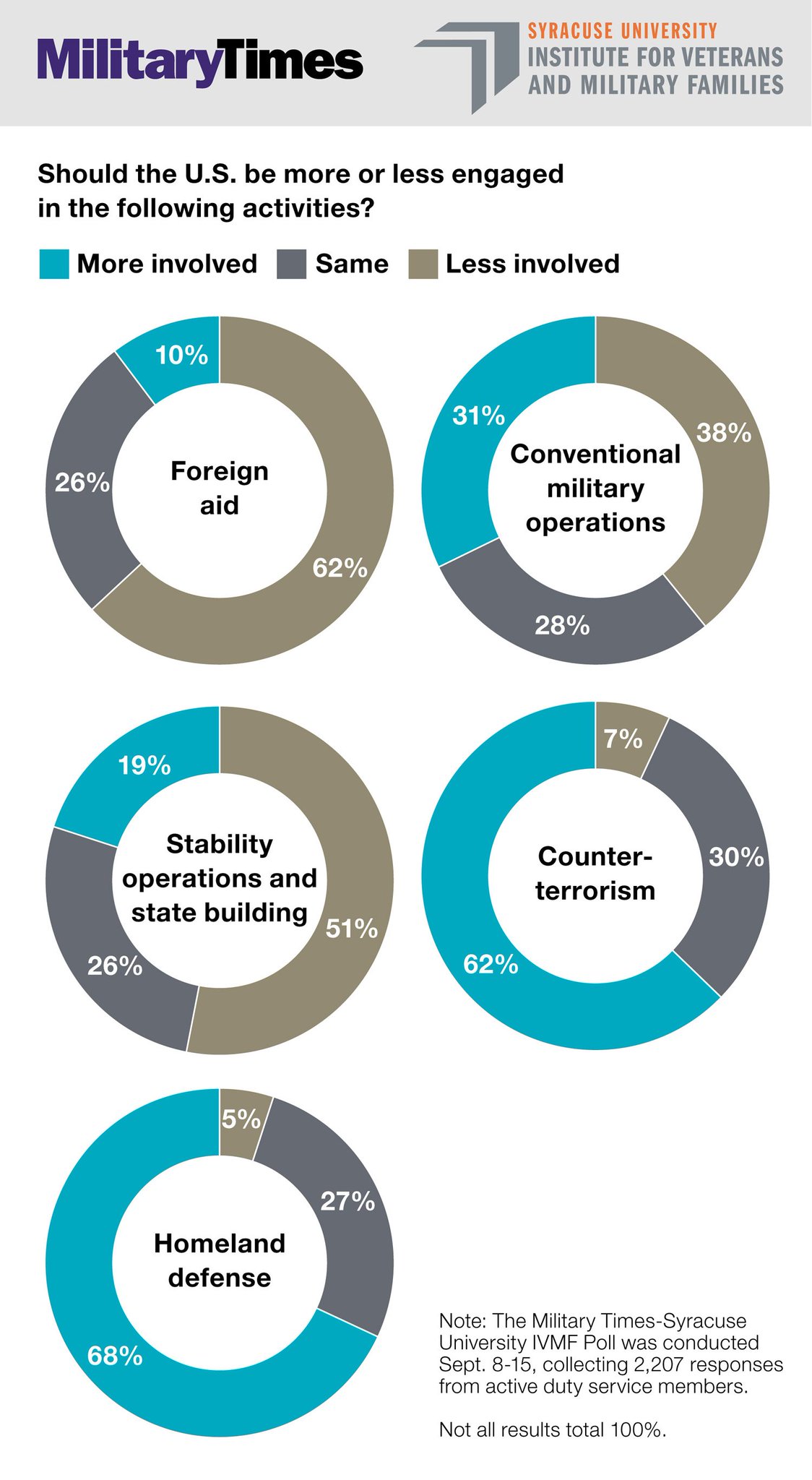 The majority of US servicemen surveyed by the Military Times and IVMF believe that the government should be more involved in combatting terrorism (62 percent), homeland defense (68 percent), cyber security (81 percent) and nuclear deterrence (51 percent).

Notably, the troops expressed the most negative response on delivering foreign military aid to the US allies. About 62 percent said they believe Washington should be less involved with the foreign aid, and just 10 percent said the US must proceed with it.

Read more ‘It’s been 15 years. Not even simplest questions answered’ – 9/11 survivor to RT

Those who were against the foreign aid said they believe the US-run post-war reconstruction efforts comes at the expense of solving American’s most pressing problems.

“We need to get out of foreign affairs and focus on our own country,” Duane Hulbert, a 26-year-old Air Force staff sergeant who responded to the survey, told the newspaper. “We need to build jobs around clean, renewable energy sources … It’s time to focus on how to protect this one world we live on. If we destroy it there is no going back.”

Other respondents seemed disillusioned with those nation-building efforts because they feel that the US non-military support for such goals has been used improperly.

The poll, conducted between September 8 and 15, surveyed 2,207 active-duty troops through a voluntary and confidential online vote. Responses came from each of the 50 states, the District of Columbia and undisclosed overseas locations, the Military Times wrote.

Nearly 15 years of post-9/11 wars, namely Afghanistan and Iraq, have not only cost thousands of American soldiers’ lives and trillions of dollars spent on military expenditures, but those countries landed in disarray shortly after the US interventions.

Afghanistan, a country where never-ending war goes on for decades, is still struggling with Taliban, economic hardships and a sinister threat of emerging Islamic State’s (IS, formerly ISIS/ISIL) affiliates keen to seize the country.

In Iraq, IS has seized considerable part of the country despite the ongoing US-led coalition aerial campaign against the terrorists. Most analysts believe the terror group’s top military brass comprises former Iraqi officers who radicalized and turned violent after suffering defeat in 2003 war.

The Republican presidential candidate to the November elections, Donald Trump, will receive on Wednesday an briefing on secret national security issues at the offices of the Federal Bureau of Investigation (FBI) in Manhattan, New York.

This will be the first meeting of this type the candidate of the red party will attend, also to be attended by the governor of New Jersey and head of the Trump's transition team, Chris Christie, as well as the retired Gen. Michael Flynn, former head of the Defense Intelligence Agency, person close to the tycoon.

The working session takes place just two days after the New York businessman outlined in a speech the main points of view on foreign policy issues.

During this intervention in Youngstown, Ohio, he reiterated his xenophobic ideas, outlined a plan for the fight against terrorism should he assume the leadership of the White House, and promised to keep open the prison at the Guantanamo naval base.

Since 1952 the US intelligence agencies have offered classified reports to the candidate chosen by each party towards the elections, therefore the Democratic candidate Hillary Clinton will participate in the coming weeks in similar meetings to the one to be held on Wednesday.

According to the program established by law, six months before the day of the presidential elections and eight from the inauguration of the next president, a coordinating council is to be created in the White House and federal agencies to direct the change of command.

Most of these measures were taken after 2002, when the General Office of Oversight of Government, annexed to Congress, indicated in a report some irregularities in the process.

The report revealed that during the transfer of the presidency of William Clinton to George W. Bush in late 2000 and early 2001, there were acts of vandalism, pranks, theft and damage to property in the White House.

HAVANA, Cuba, Apr 10 (acn) US President Barack Obama admitted on Thursday in Jamaica that Venezuela is not a threat to US National Security, but he added that sanctions announced last month are still in force.