Both men have been outspoken critics of United States President Donald Trump.

A suspicious package sent to former U.S. Vice President, Joe Biden, and another sent to actor, Robert De Niro are the latest in a series of intercepted explosive devices sent by mail. At least six others have been targeted.

Both men have been outspoken critics of United States President Donald Trump.

From October 22 to 25, suspicious packages have been intercepted in New York, Washington D.C., Florida, and California. None of the devices have detonated.

Pipe bombs have been identified in some of the packages according to the New York Police Department's Deputy Commissioner of Intelligence & Counterterrorism John Miller.

The package found in CNN’s mailroom contained devices packed with shards of glass and contained an envelope of white powder. News anchors Jim Sciutto and Poppy Harlow had to evacuate in the middle of a live broadcast as they were reporting on the suspected bombs sent to Barack Obama and Hillary Clinton.

New York City Police evacuated the building Wednesday after a suspicious package was found in the CNN mailroom. The package was addressed to Brennan, an outspoken Trump critic and contributor to the network.

The incidents are currently under F.B.I. investigation and being led by the counterterrorism team.

“This investigation is of the highest priority for the FBI. We have committed the full strength of the FBI’s resources and, together with our partners on our Joint Terrorism Task Forces, we will continue to work to identify and arrest whoever is responsible for sending these packages,” F.B.I. Director Christopher Wray said. 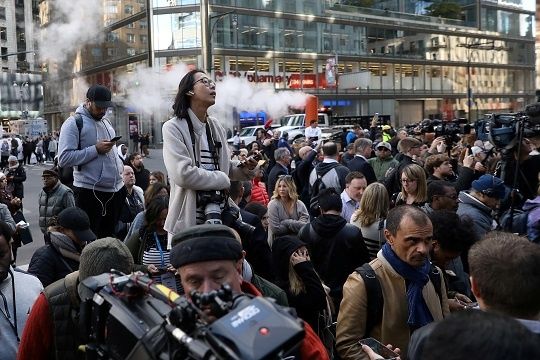 Public and media members during the evacuation of CNN | Reuters

New York City Mayor Bill de Blasio said Wednesday that the city is increasing security and that the police department’s presence would be increased all over the city. Special attention to media organization offices.

"Terrorism only works if you let it work," he said "We are New Yorkers. We are smart, we are tough, we are resilient, and we will not allow these terrorist thugs to change the way we live our lives," de Blasio said.

Who has been targeted?

The devices, apparently homemade, appear to have come from an individual or individuals with sights set on high profile Democrats. The packages were sent with heavy postage and misspelled names. Here’s who was on the receiving end of the threat:

Due to death threats, Waters was forced to cancel public appearances in Texas and Alabama in July.

She had called on supporters in a rally to protest against administration officials during heated debates across the country over the administration's "zero-tolerance" immigration policy.

Trump took aim at her on Twitter, calling her “an extraordinarily low IQ person,” and warning that she “has just called for harm to supporters, of which there are many, of the Make America Great Again movement. Be careful what you wish for Max!”

According to the Secret Service, a package addressed to Hillary Clinton, who ran against Trump in the 2016 presidential election, was found during an off-site mail screening Tuesday.

The Secret Service uncovered a suspected explosive device sent to Obama's residence in the Kalorama district of Washington, D.C. during a screening Wednesday. Officials said that Obama was not at risk.

The package sent to CNN’s offices in NYC was addressed to former C.I.A. director John Brennan who regularly contributes to the network and is an outspoken critic of Trump.

Soros is one of the world's biggest donors to liberal groups and causes. He is a hated figure for some right-wing activists in the United States and Eastern Europe.

A package was found at a property that Robert De Niro owns in the Tribeca neighborhood of Manhattan, according to a source connected to the New York Police Department. De Niro has been critical of Trump, who in turn has criticized the actor.

A suspicious package intended for Biden was intercepted in a Delaware mail facility by investigators.

Biden criticized Trump last week for his stance on Saudi leaders after the disappearance and brutal murder of Saudi journalist Jamal Khashoggi.

“I just don’t know why this administration seems to feel the need to coddle autocrats and dictators,” Biden said, “I don’t understand it.”

Trump later took a critical tone on Twitter and blamed media organizations for “Anger” in society.

“A very big part of the Anger we see today in our society is caused by the purposely false and inaccurate reporting of the Mainstream Media that I refer to as Fake News. It has gotten so bad and hateful that it is beyond description. Mainstream Media must clean up its act, FAST!”

Congresswoman Maxine Waters, an extraordinarily low IQ person, has become, together with Nancy Pelosi, the Face of the Democrat Party. She has just called for harm to supporters, of which there are many, of the Make America Great Again movement. Be careful what you wish for Max!

CNN Worldwide President Jeff Zucker said these attacks on the media by the Trump administration are what has given space to a hostile and violent political climate.

"There is a total and complete lack of understanding at the White House about the seriousness of their continued attacks on the media," Zucker said in a statement Wednesday.  "The President, and especially the White House Press Secretary, should understand their words matter. Thus far, they have shown no comprehension of that."

The F.B.I is requesting that anyone with information contact the bureau.

At Sunday night's Tony Awards, De Niro launched an expletive at Trump. On Monday, the actor apologized to Canadians for the "idiotic behavior of my president."

Trump is responding on Twitter as he returns from his summit with North Korean leader Kim Jong Un in Singapore.

Trump says De Niro, who won an Academy Award for his performance in 1980's "Raging Bull," ''has received to (sic) many shots to the head by real boxers in movies."

Trump says he believes De Niro "may be 'punch-drunk,'" adding, "Wake up Punchy!"

Ray "Sugar" Robinson didn't know what to do. The remains of the butchery were everywhere. Blood on his gloves, all over the face of his opponent, on every inch of the ring, on the bell, on the referee’s table, splattered on the clothes of those on the first row… he had punched him even with the ropes, but Jake La Motta was still there, standing.

The savage punishment received through 13 rounds assaults had him half-unconscious, but not even like that he could make his opponent bend the knee, and he made his opponent aware of that, considered by many the best boxer pound by pound in history. It was February 14, 1951.

Almost 40 years later, Robert de Niro read his autobiography and at once he wanted to make a movie of it, until he gave us the most famous among the thousands of movies about boxing ever filmed. A detail not to be overlooked if we are taking into account it’s about a technically mediocre boxer who got to be middleweight world champion in 1949, and defended his supremacy twice winning before clashing against Robinson.

But his courage enduring Robinson's punches even with his guts launched him into history, with the help of Martin Scorsese. Few remember that this was the sixth match between them, and that one of them was won by the Bull of the Bronx (when Robinson had 128 undefeated fights), but especially for what he told him with pride after the fight was stopped: I never went down, man! You never got me down, Ray! You hear me, you never got me down.

That was the end of "The slaughter of San Valentine's Day", but the legend began, and Giacobbe would never be Giacobbe again, from that day on he would be known as Raging Bull. His life was a rollercoaster of ups and downs (he fixed fights, beat his wife, cheated on her, was a car thief, alcoholic, consumed smoker, etc.) he was a true dish for Hollywood, but maybe it was necessary another Italian descendant to get to the very core of a human being with a hundred of shades.

Perhaps it even reform him, because as La Motta admitted years later, it was not recognized in the movie premiere, but he later understood that that was his past, and fortunately not his present.