This Thursday, the most outstanding athletes of 2019 in Cuba, led by wrestler Ismael Borrero and discus thrower Yaimé Pérez, elected as the best, both world and Pan American champions, received their awards.

The most relevant athletes in collective disciplines, in non-individual events, and the best sports were recognized.

Other recognitions went to the ten most outstanding figures; the rookie of the year, the youths with the most significant impact; Omara Durand as the most excellent among the disabled, and other categories.

The Anti-Doping Laboratory obtained recognition for 16 years of excellence in its work.

Commander of the Revolution and vice president of the Council of Ministers, Ramiro Valdes, presided the Gala that was held at the Revolutionary Armed Forces Universal Hall.

Also attending were the head of the National Institute of Sports, Physical Education, and Recreation (INDER), Osvaldo Vento Montiller; José Ángel Portal Miranda and Eduardo Rodríguez Dávila, Ministers of Health and Transport respectively, among other high-ranking government and sports officials.

It was the second time for Pérez as she had won the award last year. In 2019, she crowned in Doha and the Pan American Games; in addition to winning the Diamond League.

She won in seven out of ten top competitions in which she participated. She got twelve of the top 25 results of the season.

Her first big win of the year took place in Lima, where she got the gold medal with a record performance of 66,58m. Afterwards, she beat Croatian Sandra Perkovic, two-times Olympic and World Champion, in the Diamond League for second season in a row.

In winning the award, as the best female athlete of the nation, Pérez earned more votes than renowned athletes like judoka Idalys Ortiz, runner-up in Tokyo and gold medalist in Lima, and cyclist Arlenis Sierra, champion of Giro La Toscana, in Italy, Cadel Evans (Australia), and Lima.

On the other hand, Borrero earned the award as the best male athlete of the nation after crowning in Nur-Sultan World Wrestling Championship, held in Kazakhstan. There, he won six combats and achieved his second world championship title after Las Vegas 2015.

The Olympic champion in Rio de Janeiro 2016 also won in the Pan American Games held in Lima and extended his winning streak to 29.

Cuba ranked 12th in the medal table, tied with Bahrain and Sweden, in the 2019 World Athletics Championships concluded on Sunday in Doha, Qatar, where the Caribbean island accumulated one medal of each color.

Cuba’s medalists were Yaime Perez and Denia Caballero, who made the one-two in the women’s discus throw event, and Juan Miguel Echavarria, who finished third in the men’s long jump.

In the points classification, Cuba also appeared 12th with 30 units, performance to which also contributed triple jumper Cristian Napoles and high jumper Luis Enrique Zayas as they both ranked fifth.

The other athlete who provided points to the Cuban cause was the young man Jordan Diaz, world U17 and U18 champion and Youth Olympic monarch, who debuted at 18 in this major senior tournament and finished eighth place in the men’s triple jump.

A ninth-place finish in Paris two weeks ago provided the perfect motivation for Yaime Perez as she lined up to defend her Diamond League discus title. The Cuban put together one of her best series of the year, opening with 65.95m to take an early lead and extending it to 67.24m in round four.

Perkovic ended her series with 66.00m, her best throw at an IAAF Diamond League meeting this year, but it wasn’t enough to catch Perez, who extended her leading mark to 68.27m with her final throw.

“I’ve been much more consistent the past couple of years and that’s mainly because I’ve been working a lot on the mental aspect,” said Perez. “In the past I was always very nervous at important competitions but now I have this under control.”

Like Perez, Daniel Stahl led from the outset to win his first Diamond trophy. His opening throw of 68.68m stood up as the best mark of the day, but he followed it with four other throws beyond 67 metres.

After the marathon and 20km race walk events, held in previous dates, athletics took centre stage at the 18th edition of the Pan-American Games with the beginning of the track and field programme on Tuesday (6).

Five finals took place at the Estadio de la Videna, and on a cool evening in Lima Cuba’s Yaime Pérez produced the best performance by taking victory in the discus with a Games record of 66.58m.

The 28 year-old Cuban, world ranked No.1 and world leader with 69.39m, was in command after round one with 63.88m. Brazil’s Andressa de Morais, world ranked No.4, delivered a South American record of 65.98m in round two and seemed to be heading to the gold medal, but Pérez rescued herself in the final round to capture the victory with 66.58m.

The Cuban from Santiago, who gained the silver medal in Toronto four years ago, captured her first Pan-American gold. Cuban athletes have been dominant at this event, with 11 triumphs in the past 13 games.

Dacres’ winning mark erased one of the oldest Games records (67.32m by Cuba’s Luis Mariano Delís from 1983), leaving his compatriot Traves Smikle in second place with 65.02m and USA’s Reginald Jagers in third with 64.48m.

Tuesday 6 August will be remembered by sports fans in the British Virgin Islands as the day the country obtained its first gold medal at the Pan-American Games, thanks to Chantel Malone’s 6.68m (-0.3m/s) victory in the long jump. 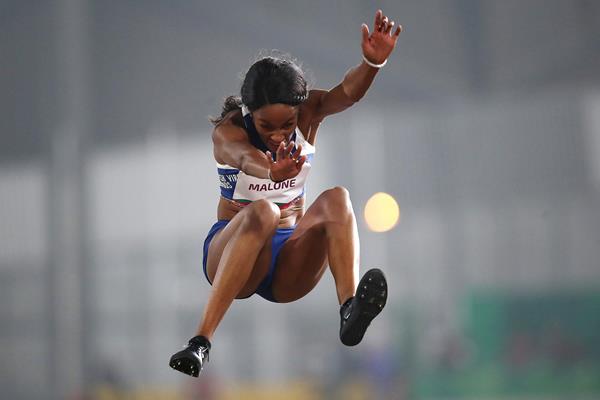 Malone, who has jumped 6.90m this season, took control of the event in round one, reaching the winning distance. USA’s Keturah Orji challenged her with 6.66m in round four, but was only good for the silver medal. Jamaica’s Tissanna Hickling was third with 6.59m, while Colombia’s Caterine Ibarguen, world ranked No.2, was fifth with 6.54m.

TRACK TRIUMPHS FOR WODAK AND MARTÍNEZ

The last two finals of the day were contested on the track, where the temperature by the end of the session had dropped to 16C. 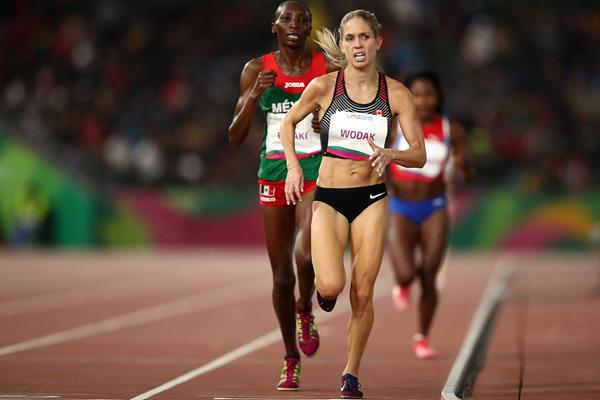 Natasha Wodak on her way to winning the 10,000m at the Pan-American Games in Lima (Getty Images) © Copyright

Arenas, always in the leading group, passed the 10km mark in 44:12 and capitalised on the penalisation suffered by Brazilian Érica de Sena after the 14th kilometre. Arenas’ time was a Games and a national record.

After cruising in 42:14 at the 10km mark, Pintado was stronger in the final metres and beat Brazil’s Caio Bonfim and Guatemala’s José Alejandro Barrondo by six seconds.

Cuba’s Denia Caballero sprang a surprise in the women’s discus, an event where two-time Olympic champion Sandra Perkovic could only finish fifth. 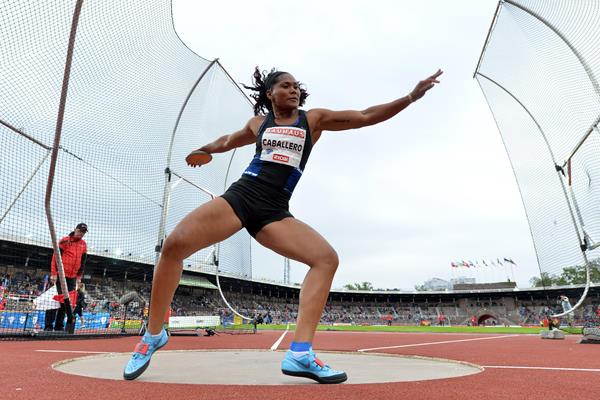 Perkovic indicated yesterday that she wasn’t expecting much on her season debut, given it was still four months out from the IAAF World Athletics Championships Doha 2019, but even still she was below-par. She registered two valid attempts – her best effort of 63.71m leaving her fifth. Caballero took victory via her second-round effort of 65.10m, with fellow Cuban Yaime Perez just behind with 65.09m and China’s Yang Chen third with 64.25m.

Sam Kendricks continued his fine start to the season with his second Diamond League victory in the men’s pole vault, the American the only athlete in the field able to clear 5.72m in the breezy conditions, which he did at the first attempt.

With that he decided to call it a night, the world champion in prime position at the head of the standings with his maximum tally of 16 points from his first two meetings. Poland’s Piotr Lisek finished second with 5.60m, while Japan’s Seito Yamamoto was third with a best of 5.48m.

Mariya Lasitskene had a few nervous moments in the women’s high jump, but the reigning world champion opened her season with a win. She had two failures at 1.90m but sailed clear on the third effort and then cleared 1.92m at the first attempt, something no other jumper could manage. Ukraine’s Yuliya Levchenko took second on countback from Sweden’s Erika Kinsey, both clearing a best of 1.90m.

“Today it was super hard for me, my body was not listening at all,” said Lasitskene. “I tried not to get injured during the competition and therefore I´m happy. That really was my only and big goal for today.”

In the women’s 1500m, a non-Diamond League event, Britain’s Laura Muir displayed her vast supremacy with a solo run to victory, the 26-year-old coasting away from the pack after the pacemaker stepped aside after 800m and cruising home in 4:05.37 – an ideal tune-up for Rome next Thursday where she will target a much faster time.

“Today was about the win rather than the time with the conditions as they are,” she said.

There was a huge upset in the men’s long jump, Sweden’s Thobias Montler the sole athlete in the field able to thrive in the difficult conditions. He soared to a personal best of 8.22m in the second round, a mark which no one could match. 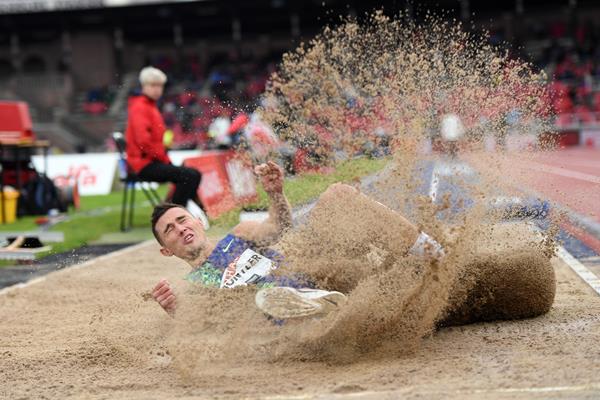 Juan Miguel Echevarria came closest, the Cuban unable to match his heroics here last year and having to make do with second via his sixth-round effort of 8.12m. USA’s Jeff Henderson was third with 8.09m while world champion Luvo Manyonga was fourth with 8.07m.

“I did my 8.43 jump a week ago but it was in the wind so it gave me confidence for today,” said Montler. “Of course I am surprised to come out on top with the big names – I know Luvo and Echevarria can jump really far but maybe I ‘m more used to the cold.”