The Catalan parliament has greenlit a referendum on the region's secession from Spain, to be held on October 1. It followed a fierce, hours-long debate on Wednesday. Madrid denounced the move, threatening to bring criminal charges against the region’s authorities. 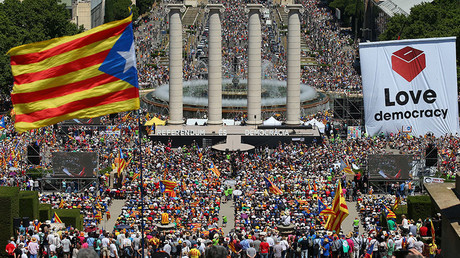 The so-called “transition bill,” designed to serve as the constitution of a sovereign Catalan state during the transition period, was championed by the pro-independence ruling coalition that submitted the motion late August. The legislation envisions the legal framework that will pave the way for a constituent assembly, tasked with laying groundwork for a brand-new Catalan Republic.

The idea, however, did not find favor with many of the local deputies, who were staunch opponents of the legislation during a gruelling 11-hour session preceding its eventual approval by 72 MPs loyal to the region's separatist government, as 52 opposition deputies of the 135-member legislature left the room in defiance.

Predictably, the outcome of the vote did not sit well with the federal Spanish government. Madrid has vowed to employ all legal means at their disposal to stop the plebiscite from going ahead, and to punish lawmakers for neglecting earlier court rulings proscribing such legislation. 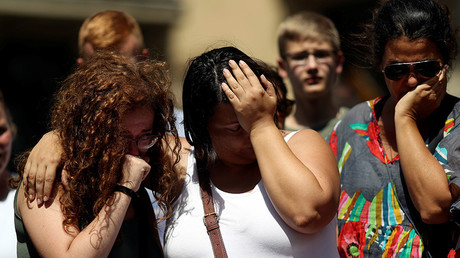 Spain’s deputy prime minister, Soraya Saenz de Santamaria, announced that the government is contesting the newly adopted legislation in the country’s constitutional court, arguing for it to be declared null and void.

“What is happening in the Catalan parliament is embarrassing, it’s shameful,” de Santamaria told journalists on Wednesday, reacting to the vote, as cited by Reuters.

On Thursday, Spain’s state Prosecutor-General Jose Manuel Maza announced his office will pursue criminal charges against members of the Catalan government and the parliament for passing the law. Maza noted the charges will be presented shortly to the Catalan High Court of Justice.

Maza told reporters he had requested the security forces to investigate any move to prepare or hold the referendum.

After reading out prepared notes, the prosecutor-general said they will “continue to act with firmness, proportionality, celerity and full subjection to legality to guarantee our constitutional framework,” according to La Vanguardia.

While the vote was a success for the Catalan elite, recent polls indicate that support for the independence cause among the local public is wearing thin.

According to a June poll, prepared by The Center for Opinion Studies, only 41.1 percent of Catalans favor independence from Spain, a decrease of over 3 percentage points compared with an earlier poll conducted in March. At the same time, the number of those who do not want to part ways with Spain reached 49.4 percent, slightly higher than in March.

Separatist sentiment in Catalonia traditionally runs high, and from time to time becomes the driving force behind massive pro-independence rallies attended by tens of thousands of people. In 2014, the region staged an informal vote on independence, during which some 80 percent voted to split from Spain. However, the vote had a poor turnout: only about a third of the region’s voters came to the polls.