The World Festival of Youth and Students, which attracted participants from all over the world to Russia, ended Saturday with a spectacular closing show in the popular Black Sea resort and former Olympic host city of Sochi. 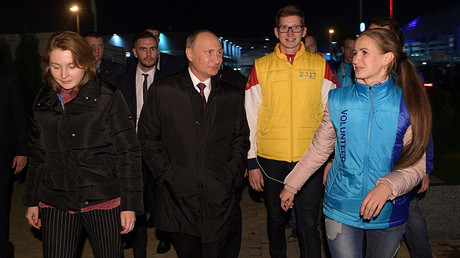 The event saw some 20,000 people from over 180 countries flocking to over a dozen Russian host cities to exchange thoughts on current developments in science, culture, economy, sport and global challenges. This year marks the anniversary of the festival, first held 60 years ago in Moscow. At the time, it provided a rare glimpse into Soviet life for many westerners. Among them was Mel Johnston, then a 23-year-old Canadian.

RT’s Caleb Maupin had a chance to speak with Johnston, now 83 and a professor, as he arrived in Sochi alongside his 16-year-old granddaughter, Harper.

“It was at that time like visiting another planet,” Johnston said, recalling the Moscow festival.

“It was a different era and I remember going through the streets that were packed with people greeting us. We were young, and we were having a great time,” he said.

When he received an invitation to this year’s festival, he did not hesitate to go and decided to bring his granddaughter along.