German Chancellor Angela Merkel’s momentum is clearly downward, and she is going to be in an even weaker position if snap elections are called. She should step aside and recognize time has been called, political experts told RT.

After talks on forming a coalition government collapsed, Chancellor Angela Merkel was forced to seek advice from German President Frank-Walter Steinmeier. The president will now try to persuade the members of the failed coalition to rethink their decision and return to talks.

RT: Merkel says she'd prefer a snap election to the formation of a minority government. Would that not be a retrograde step? 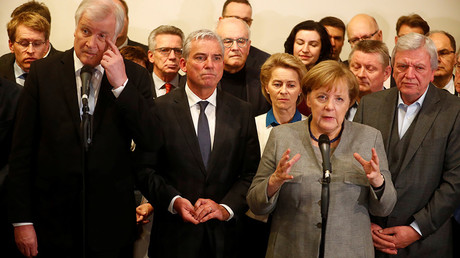 Steven Meissner, independent political observer: It will be a step backward for her. I don’t think there is any chance that she will be able to make the 34 percent that she made in September. Her momentum is clearly down. The voting population will be fairly disappointed in the outcome of her negotiations. Her standing has been hurt. She is on the way out. I said this on the eve of the elections that her days are numbered, and it is becoming more and more apparent to other observers that her days are numbered. If they have to go through another election, I would guess a number something like 29 to 30 percent is all she will do. In other words, she is going to be in an even weaker position than she is right now. Ideally, the CDU before they go into another election should have a new candidate and start over with a fresh face, but they are not going to be able to do that very quickly.

RT: Why is she calling for the snap elections?

SM: She is between a rock and a hard place. Where is she going to go? This Jamaica coalition has basically not been doable. A minority government in Germany on a federal level has never been done. Nobody really thinks that that would work or would be stable. In other words, within a year or two, it would probably collapse anyway, and you would have elections. If she had any real honor as a leader, she would have stepped back on election night, and she didn’t. So I don’t expect her to step down now either… she could step back and say I’m giving it up to a new leader of the party, and he or she will go into the election with better chances than she will...

RT: Could you explain the situation with the possible snap elections in Germany? What does it mean? Is it a step back for Merkel?

Dr. Max Otte, professor for general and international business administration at the University of Applied Sciences, Worms: It was very surprising to me. So far, she has always clung to power. I thought she would have sought another negotiated solution, so this is a surprise. Everybody is putting this to FDP. In the end, the Jamaica coalition, comprised of Greens, FDP, CDU/CSU was a very unlikely and strange construct. That cannot work, and we can see that the country is in some turmoil here. This is indeed an unprecedented situation. 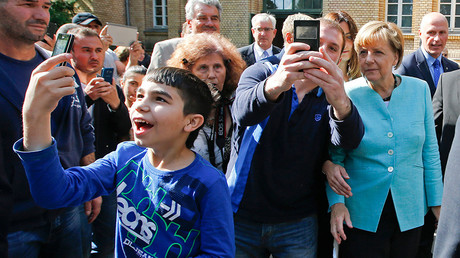 RT: The German president has called this an unprecedented situation in the history of the Federal Republic of Germany, and he is calling for fresh negotiations. How likely is it they will lead to anything new?

MO: The FDP is really for a change in the course. The FDP is maintaining its senses. I think it could have the power to bring the CDU back to its senses. It is unfortunate that the FDP was singled out as a culprit in this. I think they have a very sensible direction. We don’t know if there is going to be new elections, but if there are going to be new elections, I am pretty certain the FDP and probably also the AfD - the opposition party that came into a parliament with 13.6 percent of votes - will gain because there is quite silent and significant part of the population that wants a change in the immigration policy. I would be surprised if we had fresh elections, but Merkel has apparently stated that we are going to have them…

The Greens want this immigration policy to continue, and I think this is a big detriment for Germany, so the FDP had to walk out because there was no possibility of a consensus… Merkel is apparently closer to the Greens than to the FDP, which is really not surprising, but it’s a shame for the country. Why not form a minority government with the CDU/CSU being tolerated by the AfD and the other parties? That’s a very sensible option, but nobody talks about that. Everything is in the air, and we just have to wait and see how things develop.

RT: How likely is it that Merkel will win again if there are snap elections?

MO: I was surprised that she actually called for fresh elections because I think that she will lose further. I think she is past her prime and she should step aside. She hasn’t recognized the call of time. And sometime now or later the reality will hit her. I think she should resign, she has completely failed and this is the receipt for it.

More in this category: « 50 Dead in Eastern Nigeria Suicide Bomb Attack Suspicions about Concealed Deaths during Hurricane in Puerto Rico »