Ed Snowden’s new personal security app can be a good tool to protect individual privacy in the technological arms race of those seeking privacy and its invaders, but it also has a flip side, says a former MI5 intelligence officer.

Last week, the president of the Freedom of the Press Foundation, Edward Snowden, presented a "personal security system," Haven, aimed at helping individuals such as investigative journalists, political and social activists to track “their possessions and physical spaces when they are away from them.”

Haven can turn any Android phone into a surveillance system. Annie Machon, a former MI5 intelligence officer, says this system can be very helpful to “activists, journalists, and whistleblowers,” but also has the danger of being turned into a spying device.

“Most people focus on the tech security these days, but if you’re going into potentially hostile territory – you’re staying in hotels – it is not just your laptop that’s under threat, it is also the holistic physical security you need to think about. So, having something that you can leave in your hotel room, even if you take your laptop with you to check, to see if someone hostile has come into your room, potentially planted a bug or fiddled with your belongings or whatever, I think that could be very useful indeed,” Machon said.

However, she doesn’t exclude that the device may be hijacked as well or used with malignant intentions.

“That can have a good side if there is a domestic abuse going on, for example, and you want to record proof of it and then go to the police. It can have a bad side, because you might feel you’re being stalked by a jealous ex-spouse or spouse. So, there are always pluses and minuses with these new technologies. But just to have this as tool is a step forward,” she said. 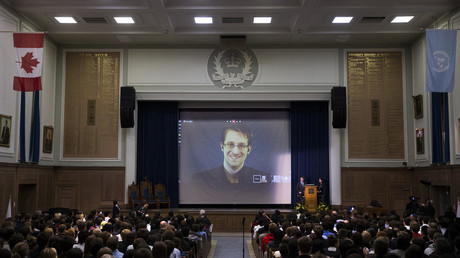 Machon said that if one is out doing things that require privacy and security, this is another wonderful tool in the arsenal of our protection, but people should not forget about old-school spy measures while relying on technology.

“This is something that is going to be used in your absence, so it can’t spy on you at the time, because you’re going to be out of whichever room you want to ensure is safe. So if it’s hacked, it’s hacked – and you have to take other measures,” she said.

A new app developed by NSA whistleblower Edward Snowden promises to harness the surveillance power of your smartphone. None of the data collected by Haven is sent to outside servers, meaning people remain in full control of their data. It was developed in conjunction with the Guardian Project, a global collective of software developers and activists who create open-source mobile security technology.

“I have no doubt that Edward Snowden knows what he’s doing. He is trying to develop this as open source. He with his background, as NSA whistleblower, will be very aware of the sort of issues that state level activists might be able to deploy. I am sure he will build in a lot of very paranoid technology to keep people safe,” Machon said.

Machon said that there had always been “sort of arms race between what the attackers can do to invade your privacy, and what you can do to try and protect your privacy as a concerned citizen, who requires that basic human right.”

She gave the example of drug cartels in Latin America in the 1980s. “They had so much money – they were effectively running their own mercenary intelligence agencies to take counter surveillance measures. And they did it incredibly well,” she said.