Russia has reminded the US that its presence in Syria is illegal after the coalition struck pro-government militias. Washington however reserved the right for “defensive” attacks to achieve peace “from a position of strength.”

The US presence in Syria is “actually illegal,” the Russian Ambassador to the UN reminded his Western counterparts on Thursday at a closed-door meeting of the UN Security Council. “Nobody invited them there,” Vasily Nebenzya stated, emphasizing that a hard fought for stability in Syria is being jeopardized by US actions.

On Wednesday, the US-led coalition said it carried out several “defensive” airstrikes on Syrian forces in Deir Ez-Zor province in retaliation for what they described as an “unprovoked” attack on the so-called Syrian Democratic Forces (SDF) and foreign military “advisers.”

Read more True US goal in Syria is control over resources, not fighting ISIS – Russian MoD 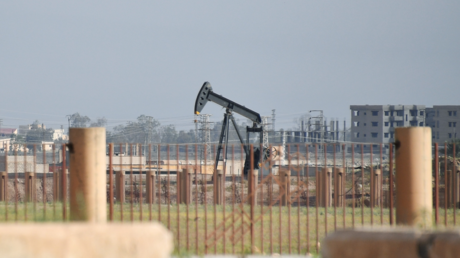 According to the Russian Defense Ministry, the Syrian militia unit was advancing against a “sleeper cell” of Islamic State (IS, formerly ISIS/ISIL) terrorists near the former oil processing plant of al-Isba, when it suddenly came under massive air strikes. At least 25 militiamen were injured in the attack, the Russian MoD noted, clarifying that pro-government troops targeted by the coalition did not coordinate their operation with the Russian command.

The US, however, maintains that the militia attacked the SDF. The Pentagon said Syrian forces moved “in a battalion-sized unit formation, supported by artillery, tanks, multiple-launch rocket systems and mortars.” The battle which lasted over three hours, the US claims, began after 30 artillery tank rounds landed within 500 meters of the SDF unit’s location.

“At the start of the unprovoked attack on Syrian Democratic Forces and coalition advisers, coalition aircraft, including F-22A Raptors and MQ-9B Reapers, were overhead providing protective overwatch, defensive counter air and [intelligence, surveillance and reconnaissance] support as they have 24/7 throughout the fight to defeat ISIS,” Air Forces Central Command spokesman Lt. Col. Damien Pickart told Military.com.

“Following a call for support from Air Force Joint Terminal Attack Controllers, a variety of joint aircraft and ground-based artillery responded in defense of our SDF partners, including F-15E Strike Eagles,” he said in a statement Thursday. “These aircraft released multiple precision-fire munitions and conducted strafing runs against the advancing aggressor force, stopping their advance and destroying multiple artillery pieces and tanks.”

@RT_com 'Actions of the US coalition do not comply with legal norms. Beyond all doubt, it is aggression' https://on.rt.com/8yo4

Damascus called the attack a “war crime,” while the Russian military asserted that Washington’s true goal is to capture “economic assets” in Syria. The Russian Foreign Ministry spokeswoman Maria Zakharova affirmed that the US military presence in Syria poses a dangerous threat to the political process and territorial integrity of the country, while Foreign Minister Sergey Lavrov called the strike another violation of Syria’s sovereignty by the US.

@RT_com 'What right does the US have to defend illegal formations in Syria?' - former US diplomat @JimJatras https://on.rt.com/8yow

More in this category: « The Trump Effect: ICE Immigrant Arrests Rose by 30% in 2017 Russian Airline Plane Crashes Killing All 71 on Board »