US sanctions are driving up the cost of cancer treatment in Iran, patients and doctors say – as restrictions reimposed on Tehran by Washington make it harder to buy life-saving medication and equipment.

Ali Shokri, a Tehran resident battling cancer, had his second round of chemotherapy after the US sanctions kicked in. The cost of each session jumped from 10 million Rial ($240) to 20 million ($475), Ali told Ruptly video agency on Monday, adding that the price hike isn’t the only problem cancer patients now face.

Read more Trump to reinstate all US sanctions on Iran, targeting over 700 entities & individuals 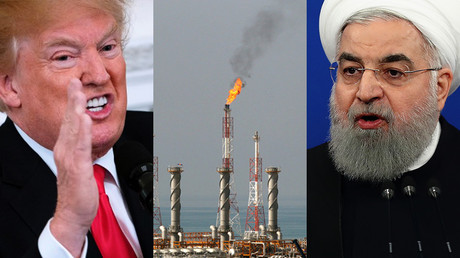 “The drugs can’t be found easily like before, and we have to look for them several times in different pharmacies.”

Marjan Shirazi, whose husband suffers from cancer, said that the drugs that used to be available before sanctions have now become “more expensive and rarer.”

The US assurance that the restrictions are meant to hurt the Iranian government is “an absolute lie” since the pressure from them “is directed on people as well,” she told Ruptly.

Doctors are stressing that punitive measures against Tehran make it harder – and in some cases completely impossible – to import supplies required for life-saving treatment. “When they impose sanctions on our banks, the money can’t be transferred easily to a foreign country to buy medications,” noted Ali Kazemian, who runs the Cancer Institute at the Imam Khomeini Medical Center. The doctor noted the US sanctions often block the imports of vital medical equipment.

Washington reinstated sanctions on the country after President Donald Trump had pulled out of the Joint Comprehensive Plan of Action (JCPOA) on the Iranian nuclear program – a move condemned by the EU, Russia and China, who are also signatories of the deal. The first round of restored sanctions was enacted in April, while the second lot came into force last week. The sanctions target Iran’s oil, banking and shipping industries.

Iranian President Hassan Rouhani, meanwhile, said that the sanctions have “no impact” on the national economy. Officials in Tehran are pledging to continue oil production and foreign trade, as well to defend the country’s traditional shipping routes.