US special envoy for Ukraine Kurt Volker is drawing a salary from John McCain's think tank, which is funded by George Soros and a DC lobbying firm working for Ukrainian President Petro Poroshenko, among others.

Volker was appointed Special Representative for Ukraine negotiations in July 2017, by then-Secretary of State Rex Tillerson, and has been “mediating” the Ukrainian crisis on behalf of the US ever since in much the same way his colleague Elliott Abrams has been doing with Venezuela.

The twist is that Volker is doing this “on a voluntary basis without compensation” and “not taxing the taxpayers,” drawing a salary from his day job as executive director of the McCain Institute for International Leadership in Arizona. Named after the late and hawkish US senator John McCain, the think tank is dedicated to "advancing leadership… in the United States and around the world." The two positions are very much aligned, Volker has said, allowing him to get his "hands dirty and actually solve our problems."

In practice, that means things like taking part in the "Occupied Crimea: 5 years of resistance" conference in Odessa – the same city where US-backed nationalists burned alive their political opponents in May 2014 – and parroting Bellingcat talking points on the Kerch Strait incident, themselves cribbed from the Security Service of Ukraine (SBU).

does not and will not accept Russia’s claimed annexation of Crimea.

has committed numerous human rights abuses in furtherance of its occupation. We will continue to maintain and strengthen sanctions until Crimea is returned. #CrimeaisUkraine.

@SpecRepUkraine Interesting analysis by Bellingcat with this key conclusion: “the shooting of the ‘Berdyansk’ most likely took place in international waters” Investigating The Kerch Strait Incident via @bellingcat

This is not surprising, however, since the list of donors of the McCain Institute includes something called the “BGR Foundation.” It shares the same Washington, DC address – and name – with Barbour Griffith Rogers, a high-profile lobbying firm that lists Volker as “Senior International Advisor” and former international managing director. 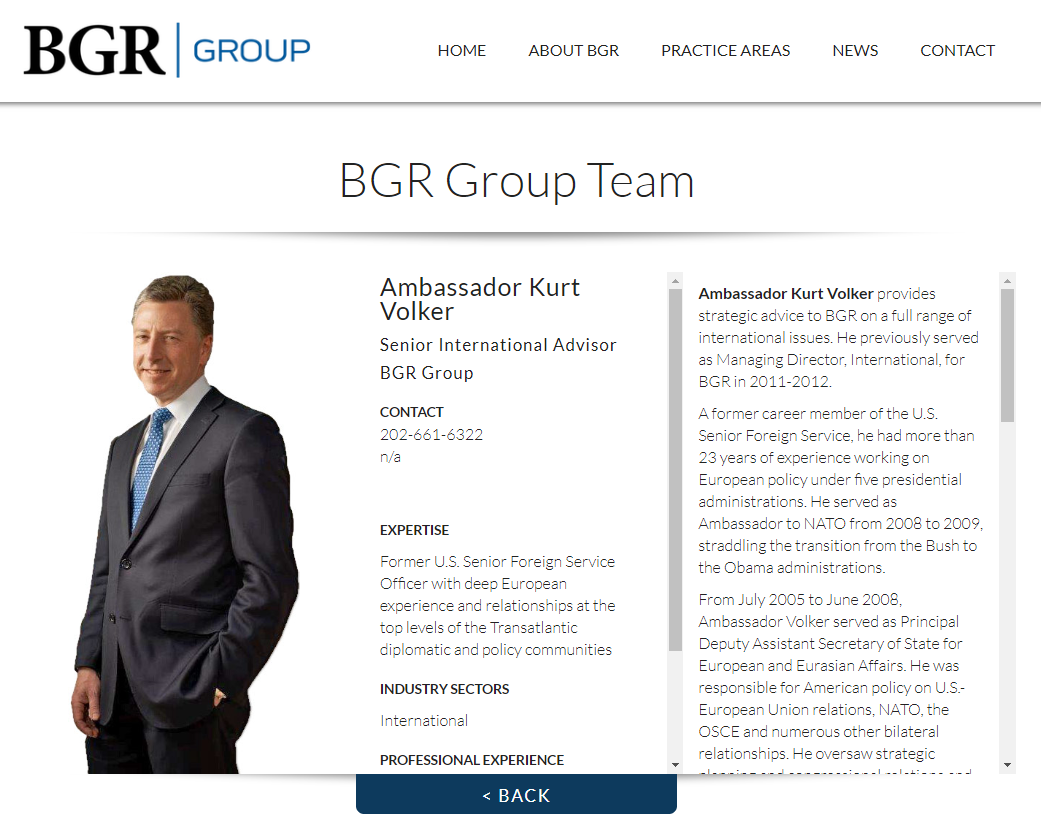 According to its filings to the US Department of Justice under the Foreign Agents Registration Act (FARA), BGR is a registered agent for none other than President of Ukraine Petro Poroshenko, whose ascension to Ukrainian presidency was brought about by the Maidan revolution of 2014, a coup cheered on most fervently by John McCain himself.

The “National Reforms Council of Ukraine,” which officially retained BGR's services, is led by none other than Dmytro Shymkiv, “Deputy Head of the Presidential Administration of Ukraine,” as per the filing BGR sent to the DOJ in January 2017. 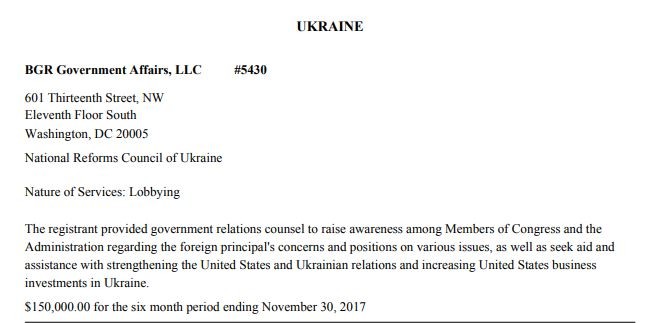 Page 242 of the Justice Department report to Congress from December 2017, listing BGR as registered foreign agent of Ukraine

It remains to be seen whether this relationship will change in June, when TV personality Volodymyr Zelensky takes office, having triumphed in a landslide runoff election this past weekend. Judging by Zelensky’s official Facebook account of his February meeting with Volker – “a friend of Ukraine” with whom he “reached full understanding on all questions” – that seems unlikely, however.

Volker was very close to the late Senator McCain, who was himself intimately involved with the 2014 "revolution" in Kiev, visiting the demonstrators and personally sharing the stage with Socialist-Nationalist Party leader Oleg Tyahnibok, for example. McCain was even offered an advisory job with Poroshenko, back in 2015, but declined because that was not allowed under US law.

Turns out another McCain confidant, David Kramer, also works at Volker’s institute, listed as "senior director for Human Rights and Democracy." Kramer was identified as the individual who during the 2016 campaign spread the "Steele Dossier" (accusing Trump of ties with Russia) to the press and a number of other people in Washington, including the "midwife of Maidan" herself, Victoria Nuland.

Among the McCain Institute’s other donors are George Soros and his Open Society Foundations, as well as Saudi Arabia – though Volker had to disavow them last year, calling it a one-time donation and saying he won’t accept any more Saudi cash after the murder of Washington Post columnist Jamal Khashoggi.

All of this adds up to the question no one seems to have asked yet: Whose interests in Ukraine is Kurt Volker actually representing – those of the Trump administration, or those of his donors and the ghost of John McCain?

More in this category: « Civilians are the real victims (and targets) of Trump’s Venezuela sanctions African Gold Mines Lose Tens of Billions Yearly to Smuggling »