During the 2019 race, Volodymyr Zelensky relentlessly bashed how Ukraine’s former president, Petro Poroshenko, had run things. Now, the comedian-turned-president is unhappy about the way he furnished his office, and wants to move.

An existing chair at Ukraine’s presidential office didn’t prove to be comfy enough for Zelensky, whether that’s due to the ergonomics, or the tough legacy of his predecessor, is unclear.

Filmed entering the office and trying the luxury chair on the day he was sworn in, Zelensky complained “it’s not comfortable,” garnering a round of applause from other people in the room.

“I’m looking [at this] and wonder when we are going to move,” he confessed with a smile.

It’s known that Zelensky is not a big fan of the building which houses the presidential administration. During his election campaign he repeatedly vowed to relocate it to a smaller and more convenient place outside Kiev.

The administration now sits at the historic quarters occupied by Ukraine’s Communist Party until 1991. But Zelensky seeks another place where he could work “at a normal European office,” and such an office could have an open space design, his allies told local media. 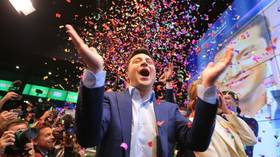 However, privacy is a consideration and it remains to be seen how behind-closed-door discussions or working with sensitive information merges with the reality of a vibrant, noisy open space.

Curiously, the relocation plans bear striking resemblance to some of the scenes from a television comedy called Servant of the People, where Zelensky played a history teacher whose honesty and commitment to justice propel him to the presidential office.

In the show that boosted Zelensky’s popularity during the 2019 campaign, his character moves the administration to a remote, shabby location somewhere in Kiev to cut costs and reduce traffic. He also scraps all luxury cars in the presidential fleet, riding a bicycle or using his sole bodyguard’s pickup truck.

But the real-life Zelensky will face real challenges which may jeopardize his cost-saving measures. It emerged recently that moving the president’s office from downtown Kiev could cost tens of millions of dollars, which are nowhere to be found in the budget. Critics of the proposal also argued that it could downgrade the safety & security of the government and the president himself.