Dozens of people, including a 12-year-old child, have been arrested after a night of escalating violence in Hong Kong during which police fired a warning shot near protesters and used water cannon for the first time.

Police said they arrested 86 people over the weekend for offences including unlawful assembly, possession of offensive weapons and assaulting police officers.

Sunday’s protests were the scene of the fiercest clashes yet between police and demonstrators since violence escalated in mid-June over a now-suspended extradition bill that would have allowed Hong Kong people to be sent to mainland China for trial.

Police fired water cannon and teargas in running battles with protesters, who threw bricks. Six officers drew their pistols and one officer fired a warning shot into the air, police said in a statement.

Mak Chin-ho, an assistant police commissioner, said violence by demonstrators had led to the police responding with force.

“We have seen an increase in the intensity and extensiveness of violence used by protesters. Their radical acts have intensified with more dangers and sometimes deadly weapons used including bricks, metal posts, long sticks, and petrol bombs,” said Mak.

Hong Kong’s government also condemned the protesters. “The escalating illegal and violent acts of radical protesters are not only outrageous, they also push Hong Kong to the verge of a very dangerous situation.” It said police would “strictly follow up” on illegal acts.

“Police will take relentless enforcement action to bring the persons involved to justice,” it said.

Hundreds of thousands of people had braved rain on Sunday to stage a peaceful, police-sanctioned march in Tsuen Wan, a part of the city noted for its links with triad members, after clashes on Saturday when police fired teargas, rubber bullets, pepper balls and sponge rounds at protesters.

By late afternoon on Sunday, about 100 riot police officers had formed into lines on two streets and protesters began to build makeshift barricades with plastic traffic barriers and bamboo rods in a standoff between the two sides. Just after 6pm local time police fired several rounds of teargas.

The crowd largely remained behind the barricades in the midst of choking smoke while some threw gas canisters back at the police. Protesters also threw bricks and Molotov cocktails at thepolice, with flames seen on the road between the two sides.

Minutes later, police launched another volley of teargas and charged at the protesters as the crowd dispersed. For the first time, police also used two anti-riot vehicles equipped with water cannon to chase away protesters. Several officers drew their guns on protesters and one fired a warning shot.

The scenes of worsening unrest provoked anger in China, where the microblog of the Communist party’s mouthpiece, the People’s Daily newspaper, condemned protesters who removed a national flag at the rally before the march and trampled on it. “Such provocation challenges the national dignity and hurt the feelings of 1.4 billion Chinese … It should pay a cost.”

The government-aligned Global Times, meanwhile, hit out at western media for its “biased” coverage of the protests, particularly accounts of how the Hong Kong police officer fired a warning shot.

The news outlet said “biased coverage has put the Hong Kong police in a dangerous position, as stories about police brutality have surfaced in recent weeks. Without considering facts, some Hong Kong reporters have stood by the anti-government protesters, abandoning the fundamentals of neutral and justified reporting”.

Some protesters said they were resorting to violence because the government had not responded to their peaceful demonstrations. 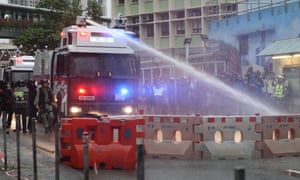 “The more the government ignores us, the more we have to come out,” said Peggy Tai, who is in her 60s, earlier in the day.

After almost three months of continuous protests, demonstrators remained determined in their fight for political rights.

The wave of protests, which started in early June to oppose an extradition bill under which individuals could be sent to mainland China for trial, has morphed into a broader anti-government, pro-democracy movement.

Demonstrators have five demands: the complete withdrawal of the now-suspended extradition bill; the setting up of an independent body to investigate police violence; a halt to the characterisation of protests as “riots”; an amnesty for those arrested; and a resumption of political reform to allow the free election of Hong Kong’s leader and legislature.

Hong Kong’s leader, Carrie Lam, said last week she would establish platforms for dialogue although protesters dismissed her offer and said she needed to respond to their demands.