Hurricane Dorian has killed at least seven in the Bahamas, as well as an elderly man in North Carolina, as the storm looms over the Southeast coast.

Dorian, a Category 2, is churning next to northeast Florida and might make landfall as it inches closer to the Carolinas -- and South Carolina's governor is warning that "time to get out is running out."

(MORE: Hurricane Dorian's path: The forecast for Florida, Georgia and the Carolinas)

Devastation in the Bahamas

Dorian first slammed into the Bahamas on Sunday afternoon as a Category 5, the strongest Atlantic hurricane landfall on record. 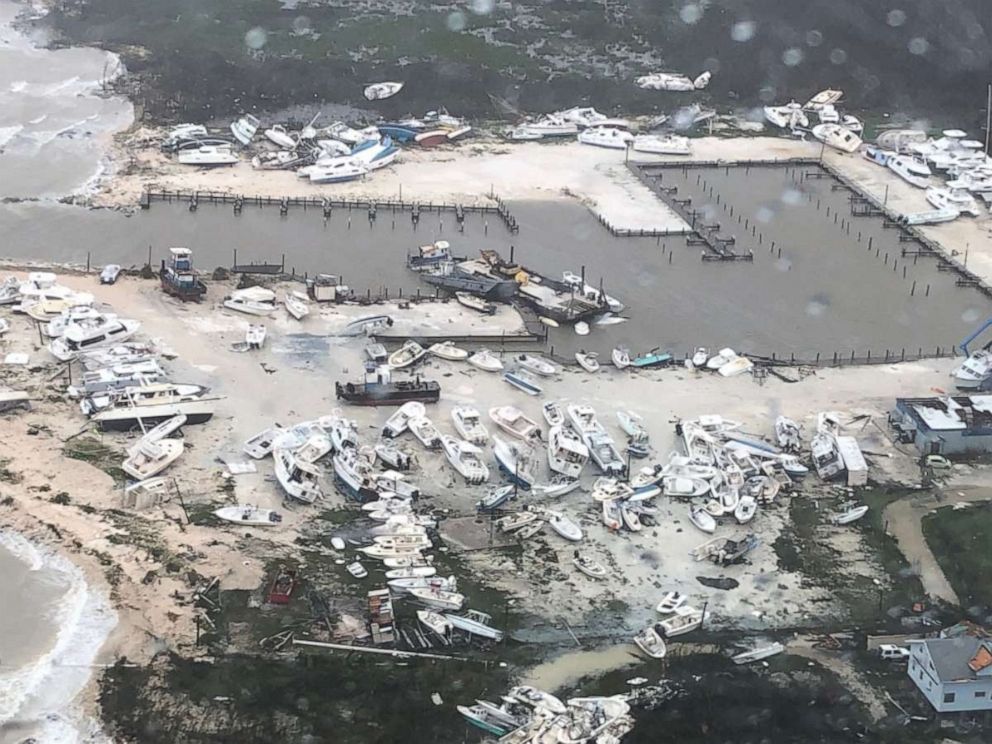 At least seven people were killed on the Abaco Islands in the northern Bahamas, where the storm made landfall.

"We can expect more deaths to be recorded," Bahamas Prime Minister Hubert Minnis told reporters Tuesday. "Our priority at this time is search, rescue and recovery." 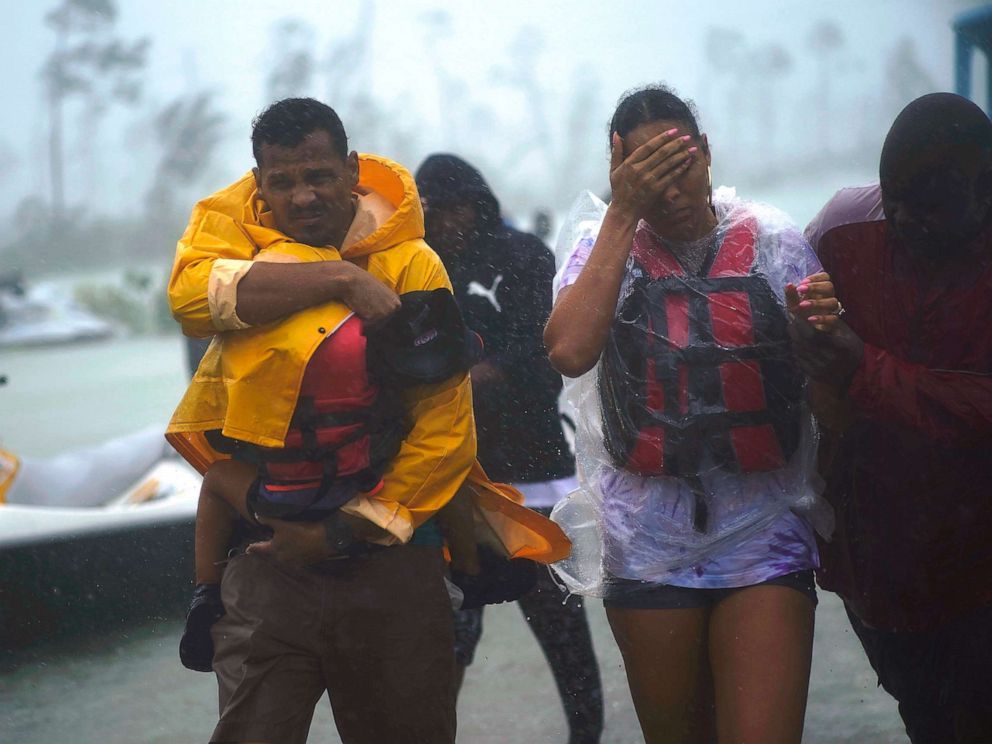 Ramon Espinosa / APA family is escorted to a safe zone after they were rescued as Hurricane Dorian continues to rain in Freeport, Bahamas, Sept. 3, 2019 END_OF_DOCUMENT_TOKEN_TO_BE_REPLACED 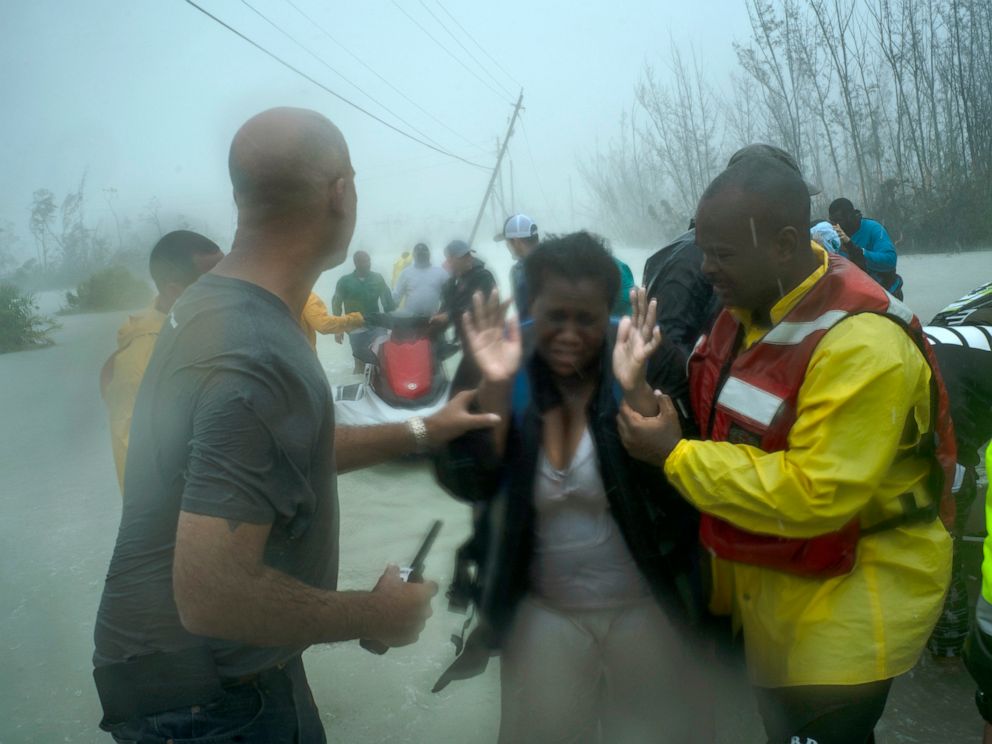 The storm hovered over the archipelago's northern islands for nearly two days, leveling dozens of buildings, flooding roads and submerging an airport.

"We're receiving supplies and we're looking for people who can assist with shipping," Neilly told ABC News on Tuesday. 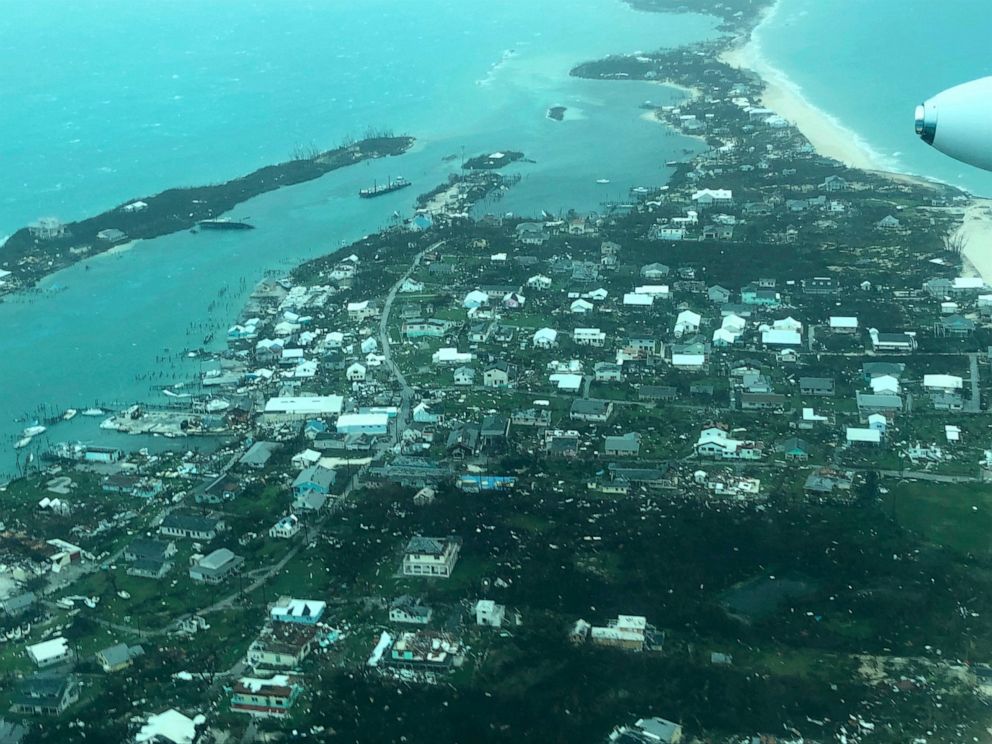 The Associated Press / This aerial photo provided by Medic Corps, shows the destruction brought by Hurricane Dorian on Man-o-War Cay, Bahamas, Tuesday, Sept.3, 2019. Relief officials reported scenes of utter ruin in parts of the Bahamas and rushed to deal with an unfolding END_OF_DOCUMENT_TOKEN_TO_BE_REPLACED

The British Royal Navy was expected to deliver food to the hard-hit Abaco Islands Tuesday night, according to the Bahamian prime minister. The U.S. Department of State said it's providing humanitarian assistance, and the U.S. Coast Guard said it's rescued 61 people.

'Time to get out is running out'

Dorian is now hovering just off the coast of Florida and southern Georgia, pummeling the Sunshine State to Savannah to South Carolina with rain.

A hurricane warning is in effect for the entire South Carolina and North Carolina coastline, where a dangerous storm surge of up to 8 feet is expected. A tropical storm watch even extends into southern Virginia. 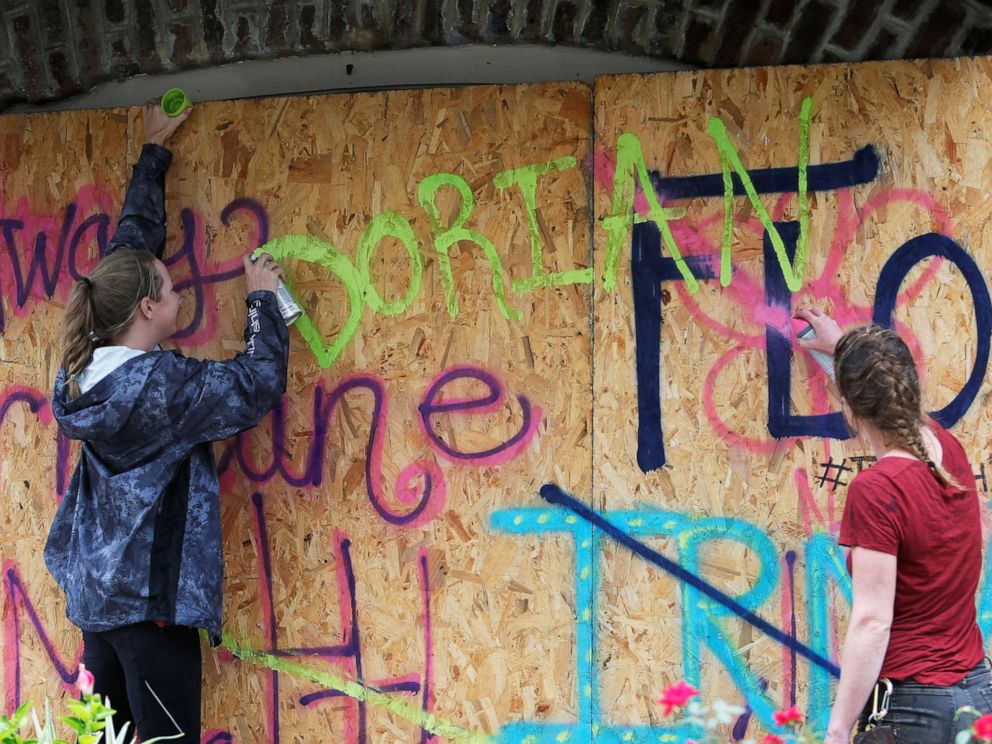 Randall Hill/Reuters / Coreyanna Moore and Madison Moore of Charleston add Dorian's name to their hurricane defenses ahead of the arrival of Hurricane Dorian in Charleston, S.C., Sept. 4, 2019. END_OF_DOCUMENT_TOKEN_TO_BE_REPLACED

Kevin McAleenan, Acting Secretary of Homeland Security, told Univision that undocumented immigrants should not "worry about immigration enforcement during the storm -- worry about staying safe."

"There will be no routine immigration enforcement during this storm or in the immediate aftermath of this storm," McAleenan said.

Melbourne Beach, Florida, resident Nancy Whiting lives in an evacuation area, but she opted to ride out the storm in her home -- the same as she did for Hurricane Matthew in 2016 and Hurricane Irma in 2017 -- to address leaks right as they hit.

(MORE: Tips to keep in mind if you're evacuating)

"A lot of the neighbors stayed back. They tend to hunker down, just ride out the storm. They've been through a lot of these before," Whiting told ABC News. "This is what happens in Florida you stay and protect your property and help our your neighbors."

But officials are urging those in evacuation zones to flee the coast immediately. 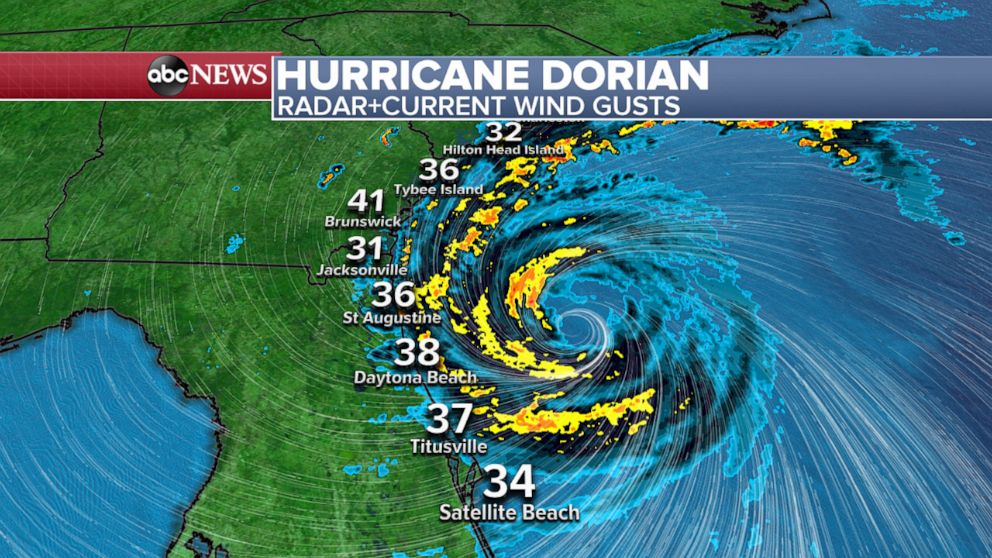 "It's the water that kills people," McMaster warned, "and it's clear that we're going to have a lot of water."

Storm surge will push the water inland into the marshes and the rivers, he said, and at the same time the rain could reach 15 inches, creating "a collision of water" along the coast.

Although for some, evacuating isn't an option. Frances Eason's husband, David, is spending the hurricane in a Mt. Pleasant, South Carolina, hospital.

"We went through [Hurricane] Hugo in 1989 and we went through Florence last October and several in between," Frances Eason told ABC News. "We fared well through it all."

For coastal residents who choose not to evacuate, Gov. McMaster recommends staying indoors in an interior room and away from windows and glass doors, closing the curtains and blinds, and securing important personal documents.

And even if there's a lull, don't go outside, McMaster warned -- because that could be the eye of the hurricane. 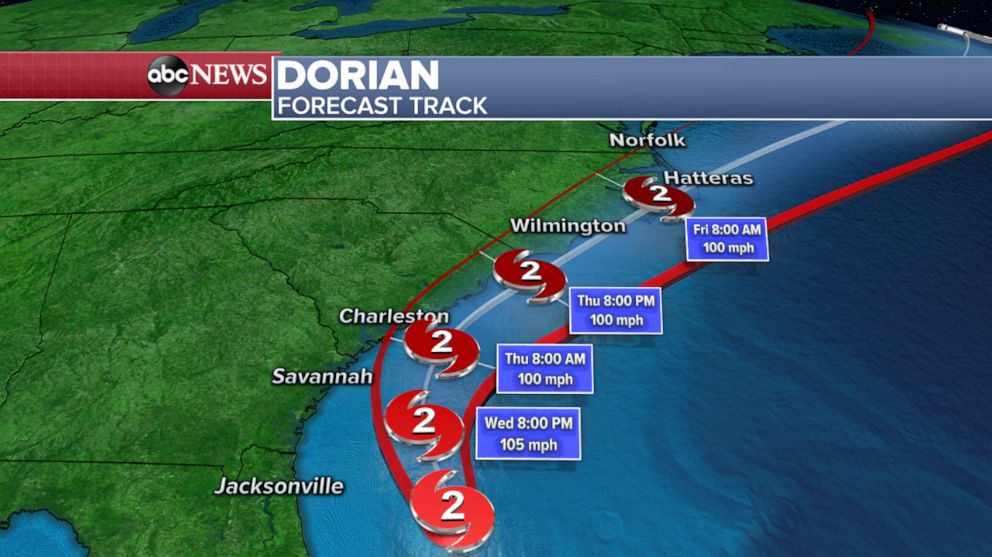 The storm will then come close to Charleston, South Carolina, Thursday morning.

Authorities in Charleston are urging the residents who chose not to evacuate to stay off the roads; authorities say during a storm last year, 40 people were rescues from flooded cars.

From Charleston, the storm will approach North Carolina's coast. Dorian could possibly make landfall in Wilmington Thursday night or make landfall on the state's barrier islands, the Outer Banks, early Friday morning as a Category 2 hurricane.

Dorian is expected to head out to sea by Friday evening.

More in this category: « Arreaza denounces targets of the US Blockade against Venezuela Hurricane Dorian whips Charleston and spawns tornadoes in the Carolinas »