Dorian, a high-end Category 2 storm with sustained winds up to 110 mph, was centered over the ocean some 45 miles off Charleston by noon ET Thursday, looking like it would move along the coast.
The eyewall -- containing the storm's strongest winds -- is expected to move somewhere over the Carolinas' coast later Thursday, even if the storm's center doesn't technically make landfall.
TRACK THE STORM
Rain was pummeling coastal areas including Charleston on Thursday morning, flooding streets around the city. Up to 15 inches of rain could fall in Charleston, forecasters say, and storm surge could send 5 to 8 feet of water ashore, especially during the afternoon's high tide.
"Water's starting to rise and it's actually coming up to some houses in the area," storm chaser Aaron Jayjack told CNN from Charleston in the morning.
Karen Moran also said in a video she recorded from an elevated floor that the water was rising.
More than 241,000 homes and businesses were reported without power late Thursday morning in Georgia, South Carolina and North Carolina. 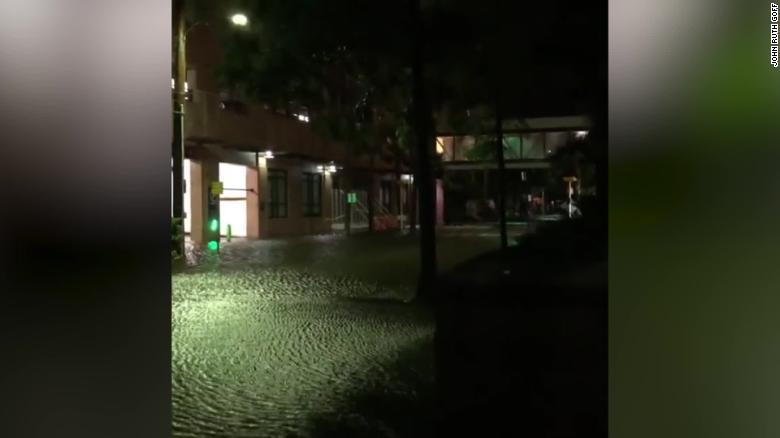 Streets of Charleston were flooding on Thursday morning.

Tornadoes reported along the Carolinas' coast

Several tornadoes or possible tornadoes were being reported in parts of the Carolinas Thursday morning, including a twister that the National Weather Service says left a trail of destruction in Emerald Isle, North Carolina.

Pictures shared by the weather service show mobile homes toppled, some torn apart, with debris strewn around the area.
Tornadoes are common in the thunderstorm bands of hurricanes and tropical storms, especially in the right-front quadrant of the system. The tornadoes tend to be short-lived and may come with little, if any, warning.
North of Wilmington, a tornado passed a fire station Thursday in video tweeted by the National Weather Service.
About 40 miles southwest of Wilmington, parts of several homes' roofs and siding were ripped off Thursday morning, the winds scattering debris across lawns, photos shared by the Brunswick County Sheriff's Office showed.
It wasn't immediately clear whether a tornado caused that damage, located in the The Farm housing development near the town of Carolina Shores. 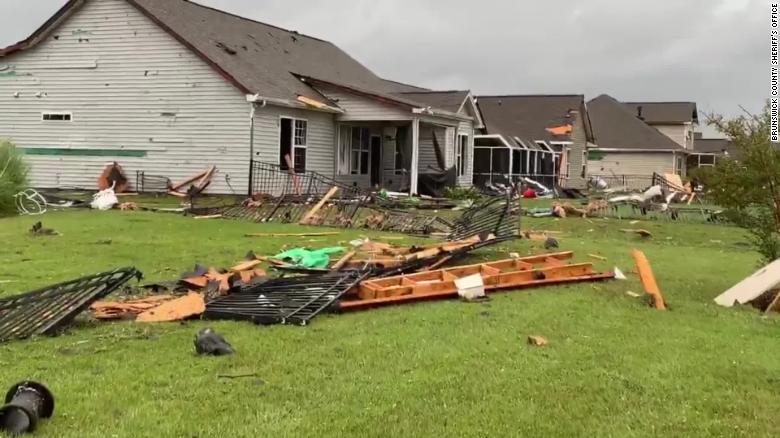 Pieces of roofs and siding were torn off homes Thursday morning in Carolina Shores, North Carolina, about 40 miles southwest of Wilmington.
In South Carolina, firefighters say an apparent tornado damaged an unspecified number of vehicles and buildings in North Myrtle Beach.
Wayne White captured video of the funnel cloud there. He said he was checking on some properties he manages when he saw it.
"I saw the circular clouds and was going to take a little video, and the funnel came out of nowhere," he tweeted.

More than 1 million people in parts of South Carolina and North Carolina are under mandatory evacuation orders, forecasters said.

FOLLOW LIVE UPDATES
South Carolina Gov. Henry McMaster declared a state of emergency, and the hurricane center warned of "life-threatening storm surge and dangerous winds, regardless of the exact track of Dorian's center."
As conditions began to deteriorate in Charleston early Thursday, emergency management officials requested that people who remained shelter in place, the Charleston Police Department said on Twitter. 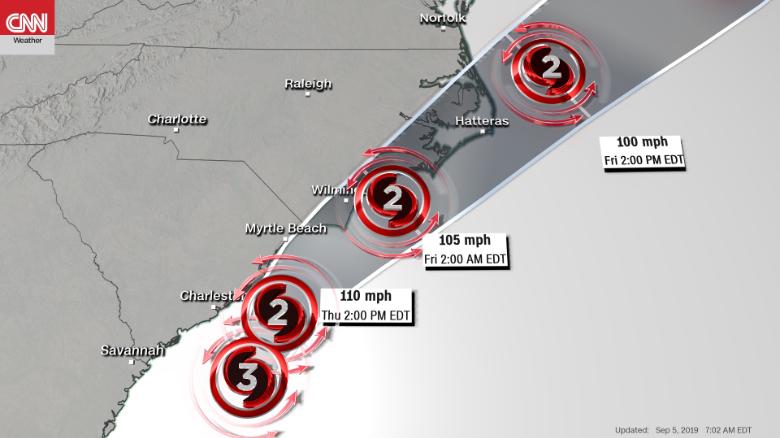 Charleston Mayor John Tecklenburg said this week he wanted the city to be a "ghost town" during the storm.
"Just stay put for another six or eight hours until this passes, and then we're going to clean up and get back to normal quickly," Tecklenburg told CNN's John Berman.

A hurricane warning is in effect from north of the Savannah River up to the North Carolina-Virginia border -- meaning people in those areas are expected to experience hurricane conditions (with winds of at least 74 mph) at some point.

Dorian's approach to the US comes days after it devastated parts of the northwestern Bahamas.