The construction of a spent nuclear fuel storage facility in Ukraine poses “significant safety risks for the whole of Europe” because of numerous rule and standards violations, Ukrainian environmentalists warn.

The Ukrainian Greens Association, a non-profit environmentalist organization, listed the risks in a statement released on Monday.

“We are deeply concerned about plans to build a spent nuclear fuel storage in the upper reaches of the Dnepr River close to densely populated places,” the statement said, citing a speech made by the association’s spokeswoman, Anna Rak, at the first Nuclear Energy Policy Forum in Brussels on June 30.

Rak also emphasized that the government plans “to secretly fast-track the construction of a surface dry, spent nuclear fuel storage system… close to the Dnepr river,” ignoring basic safety standards and “creating the threat of a second Chernobyl.”

Ukraine’s Greens stressed that the decision to build the facility just 70 kilometers away from the Ukrainian capital of Kiev, in Chernobyl’s exclusion zone, was taken “without a proper environmental impact assessment and public consultation with the [local] residents.” 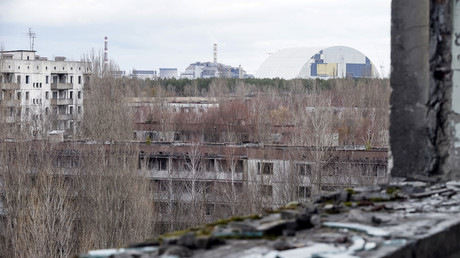 They also warned that the contractor for the project, Holtec International, actually lacks sufficient experience while the technology it plans to use in construction has never been tested or tried in any other country.

The association added that the procedure of choosing the contractor was “neither transparent nor open,” warning that Ukraine may once again become a subject to “unpredictable and dangerous nuclear experiments,” apparently referring to the Chernobyl nuclear disaster.

The organization demanded that Ukrainian authorities “ensure that the project complies with all international rules and standards before the construction is launched” and emphasized that the residents of the Kiev region have “an unconditional right” to get all relevant information about the project and to take part in the discussion concerning its construction.

The warning for the Ukrainian Greens came just as the Ukrainian Energy Minister Igor Nasalik confirmed that the government secured a $260 million loan to finance the construction project.

The move also comes amid mounting concerns about the future of the European nuclear energy sector as over about 45 percent of current nuclear plants are expected to go offline in the next 10 years.

As Europe is sluggish with its large-scale projects, further slowed down by engineering, construction and financial woes, two meetings in Paris and Brussels were organized in June by the New Nuclear Watch Europe (NNWE) advocacy group to discuss he hottest issues impeding progress in the nuclear sector – costs and hazards.

All participants agreed on the necessity to develop a common continental standard on spent nuclear fuel and radioactive waste management, with the case of Ukraine in particular appearing to emphasize this necessity.

More in this category: « Poor Refugees Are Being Sold and Killed for Their Organs War machine: Robots to replace soldiers in future, says Russian military’s tech chief »