Russia has threatened to respond to “freshly invented” punitive measures imposed by the EU over the Skripal poisoning. Moscow says it’s an arbitrary punishment that disrespects established non-proliferation norms.

The accusations that gave rise to the sanctions “don’t stand up to criticism,” the Russian Foreign Ministry said in a statement. “We reserve the right to retaliatory measures in response to this unfriendly act.”

On Monday, Brussels used its new powers against four Russian nationals over the March 2018 poisoning of double agent Sergei Skripal and his daughter Yulia in the UK.

Alexander Petrov and Ruslan Boshirov (named in the sanctions ruling as Russian intelligence agents Alexander Mishkin and Anatoliy Chepiga) were subjected to a European asset freeze and a travel ban, along with Igor Kostyukov, the head of Russia’s main intelligence directorate (the GRU), and his deputy, Vladimir Alekseyev. 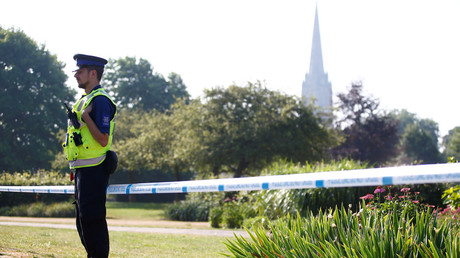 The EU also sanctioned five Syrians who it claims were involved in the Damascus government’s chemical-weapons program.

“It’s notable that among the first subjects to be added to the EU’s ‘chemical’ restrictions list are citizens of Russia and Syria – two countries that (unlike, for example, the US) have ensured the complete destruction of their chemical weapons arsenals under OPCW control,” said the Foreign Ministry.

Moscow has repeatedly denied any involvement in the Skripal poisoning and offered to help with the investigation. London has not provided any conclusive proof of Russian involvement.

The EU Council adopted a new regime of restrictive measures on October 15, 2018. Under the new regulations, the EU reserves the right to sanction persons and entities it deems to be involved in the development and use of chemical weapons, without seeking the opinion of the UN Security Council.

MOSCOW (Reuters) - Russia would consider any new chemical weapons-related sanctions imposed by the United States to be illegal, a Kremlin spokesman said on Wednesday.

The U.S. State Department said on Tuesday it would impose additional sanctions on Russia after Moscow failed to give reasonable assurances it would not use chemical weapons after a nerve agent attack on a former Russian spy in England.

Brussels: EU leaders on Friday pledged to crack down harder on chemical weapons and step up efforts to combat spying, as Europe frets about threats from Russia.

Three months after a nerve agent attack in the British city of Salisbury, blamed on Russia, united the EU in condemnation of Moscow, the bloc's leaders said they wanted new measures to stop the spread of chemical weapons.

A summit of EU leaders in Brussels called for "the adoption as soon as possible of a new EU regime of restrictive measures to address the use and proliferation of chemical weapons".

The call came a day after the international community voted to beef up the powers of the world chemical weapons watchdog, allowing it to name those responsible for toxic arms attacks in Syria.

The Salisbury attack, along with repeated gas attacks in Syria's bloody civil war and the assassination of North Korea leader Kim Jong-Un's half brother using VX nerve agent in Malaysia, have led to fears that the century-old taboo against chemical weapons was being eroded.

The European Commission, the EU's powerful executive arm, said Wednesday's decision to boost the powers of the Organisation for the Prohibition of Chemical Weapons (OPCW) was a "crucial step towards preserving and upholding the global norm against the use of chemical weapons".

And with European nations increasingly anxious about Russian interference in elections across the continent, the summit tasked the commission with coming up with "a coordinated EU response to the challenge of disinformation".

Leaders also urged EU countries to cooperate more closely and in consultation with NATO, to combat the threat from "hostile intelligence activities".

A research group within Islamic State is alleged to have developed and used warfare poisonous agents in the areas under their control. Russia's Foreign Ministry says ISIS now has the scientific documentation necessary to produce chemical weapons.
Subscribe to this RSS feed