Beijing: The heaviest average rainfall to lash a swathe of southern and eastern China in more than half a century brought torrential rain and floods, destroying houses, damaging crops and forcing the evacuation of nearly 80,000 people, state media said.

Even more rain is expected, state television said on Thursday, after average rainfall in the affected areas this week was recorded as 51% higher than in the corresponding periods of previous years, and the largest since 1961.

State television showed images of half-submerged buildings and flooded streets in some of the worst-hit areas. Trains along the Beijing-Guangzhou railway were delayed after rising waters blocked a bridge in the southern province of Hunan, it added.

The Union of Railways of Cuba announced the cancellation of its operations with passengers at the national level until it is possible to resume them, due to the damage caused by the rainfall to the road infrastructure.

For its part, the National Bus Company adopted a similar measure with the buses leaving or passing through the central provinces of Cienfuegos, Villa Clara and Sancti Spíritus.

In those three territories, at least 11,000 people were evacuated, in response to phenomena such as the flood of rivers and releasing dams.

Also in Matanzas, in western Cuba, more than 2,300 people had to be moved to safe places, with the municipalities Martí, Perico, Colón and Pedro Betancourt as the most affected.

A massive heat wave descended on Southern California on Sunday, bringing record-breaking temperatures and fueling fires throughout the region, including one in Silver Lake that threatened homes and forced the closure of the 2 Freeway for several hours.

Forecasters expected the heat to peak Monday, with temperatures ranging from 100 to 110 degrees in most inland areas and potentially breaking records along the coast. Public officials braced for the impact, issuing a flex alert asking residents to conserve electricity and opening cooling centers across the region.

As fire crews continued to battle the so-called Sherpa fire that has burned roughly 7,893 acres in Santa Barbara County, firefighters in Los Angeles got their own scare in Silver Lake, where a fire spread into brush along the 2 Freeway, which was shutdown about 2 p.m. and reopened at 5:30 p.m.. Scores of firefighters – and some residents – quickly descended on the scene Sunday afternoon, trying to save nearby homes. 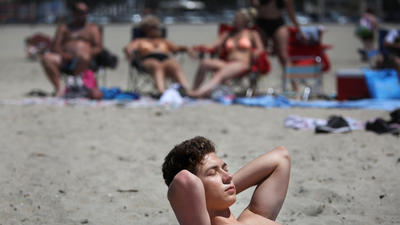 “I hope it’s not telling us what’s going to happen this summer,” said Leesa Martling, a 56-year-old landscape designer who watched people try to douse the Silver Lake fire with water buckets. “I hope this isn’t going to be the hottest summer ever.”

Meanwhile, a wildfire fueled by dry brush and sweltering temperatures has scorched 1,500 acres just north of the U.S.-Mexico border and prompted mandatory evacuations for the entire East County community of Potrero.

Tuesday could mark the start of a cool-off, as a high-pressure system moves east and moisture-filled clouds blow in from Baja California, said Stuart Seto, a weather specialist with the National Weather Service. Temperatures should drop by about 10 degrees, he said.

The hot, dry weather was a sharp contrast to the cooler, cloudier days Los Angeles has seen in recent weeks – nicknamed “June gloom” by locals.

“It changes so fast,” said Terry Choi, a Torrance resident avoiding Sunday’s heat at an ice cream parlor in Alhambra. “I was wearing cardigans last week.” 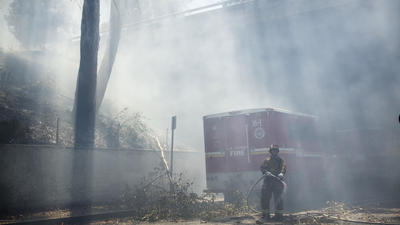 That danger was highlighted in Silver Lake, where a fire quickly spread Sunday afternoon, threatening a neighborhood along the 2 Freeway. Smoke spread over the closed roadway as some residents tried to douse hot spots, shoveling dirt or spraying water from garden hoses.

Marnie Klein was sitting on her couch when she heard a rustling noise, like leaves. She looked up to see a telephone pole just beyond her Lake View Avenue backyard completely engulfed in flames. She grabbed a phone to call 911, wielding a garden hose in her other hand.

“Somebody help!” she screamed.

The fire started near the intersection of Lake View Avenue and Allesandro Way – the cause was under investigation – and pushed northwest by winds, Los Angeles fire officials said. Nearly 200 firefighters responded as a helicopter swooped over the freeway, dropping fire retardant.

Crews needed about 45 minutes to get the fire under control. Two homes on Corralitas Drive were damaged along with three sheds on nearby properties, said David Ortiz, a spokesman for the Los Angeles Fire Department.

The dry weather and 100-degree heat set the stage for the fire, Ortiz said.

“The biggest factor was the high temperature,” he said. “The grass was 100% receptive to the fire.”

The flames stopped alarmingly close to Klein’s home. Part of her back fence lay in a charred pile. The cushions on her patio furniture were singed. Her house smelled of smoke, but it wasn’t damaged.

“I’m the most lucky person of the day,” Klein said. “There were guardian angels watching over me.”

Another fire broke out Sunday afternoon in San Diego County, tearing through 100 acres of rocky, steep terrain and prompting dozens of evacuations west of Potrero, located not far from the Mexican border.

In Santa Barbara County, firefighters worked to better contain the Sherpa fire before the weather conditions worsened. That fire, which sparked Wednesday afternoon near Refugio Road, chewed through a combustive combination of chaparral, tall grass and brush in a wilderness area that hasn’t burned since 1955.

The fire also burned a small water treatment building at El Capitan state beach, fire officials said, and damaged avocado, lemon and olive crops. At one point, the fire forced the closure of the 101 Freeway.

As of Sunday afternoon, officials estimated the fire was 51% contained, but warned that the biggest challenge could still be ahead. A red-flag warning has been issued until 10 a.m. Tuesday. 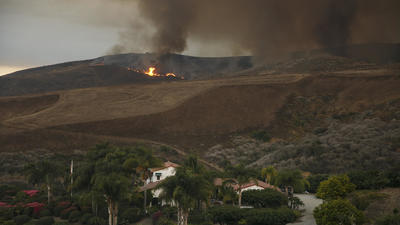 “The greater danger of the fire is always at night here because of the sundowner winds,” said Costa Dillon, an information officer stationed at the command post.

For Bryan Adams and Katia Kaplun, the year’s hottest day began with a stop at a splash park in City Terrace, where their young son could run through jets of water. After that came a stop at Fosselman’s Ice Cream, where outdoor seats were empty as customers crammed into the air-conditioned parlor.

Adams said his family’s house isn’t well-shaded and doesn’t have air-conditioning. They rely on wall-mounted units, outdoor fans and a kiddie pool to get through the summer, he said.

“We have to be creative about ways to stay cool,” Adams said.

Down the street, Valerie and Richard Gonzalez walked out of Target pushing a shopping cart loaded with two large tower fans. There’s no air-conditioning at their home in El Sereno, they said, so they planned to set up a pool, blast the fans and ice beers to stay cool.

“We’re just going to hang out and wait for the sun to go down,” Valerie Gonzalez said.

When they reached their car, she sent her husband back inside the store to buy a towel for their drive home. The steering wheel was too hot to touch.

Several countries have offered to lend Canada a hand in combating apocalyptic wildfires raging through Alberta forcing tens of thousands to flee their homes.

Massive blaze in Alberta could double in size and go on for months, local officials predict. There are about 19,000 people already evacuated from the affected areas.

More than 1,000 pilgrims have been evacuated and two have been injured during a fire at a hotel in the Muslim holy city of Mecca, Saudi Arabia. The incident occurred just six days after a deadly crane collapse at the pilgrimage site.

The Chilean Navy’s SHOA oceanographic service issued the tsunami alert for the country’s central and southern coast after a magnitude-7.2 earthquake hit the coastline.

SANTIAGO – Chilean authorities on Wednesday issued a tsunami alert along some 4,000 kilometers (2,400 miles) of the country’s coastline after reporting a magnitude-7.2 earthquake, while the U.S. Geological Survey said the quake measured 8.3 on the Richter scale.

BEIJING – More than 1 million people were evacuated, close to 200,000 homes had power outages, and some 600 flights and 7,300 ship sailings were canceled as typhoon Chan-hom made landfall on the east coast of China.