Thus wrote last Friday the journalist Roberto Casín in The New Herald whose article was named: THE MARIA RAMOS’S KITTEN.

At some point in his text he refers the scandal of the electoral agreement between Hillary Clinton and the Democratic Party.

In his writing he asserted that the dividing line of money between Republicans and Democrats, if there was ever one, has already vanished.

Casín added that certain honest voices among democrats admit that the concept is obsolete and that the party has been disconnected from the minds and hearts of the country.

He said that the great ethical slap has just been delivered to the puritans of the politics of the former presidential candidate Hillary Clinton, after the former chairman for the Democratic National Committee, Donna Brazile revealed in a book the existence of a secret agreement between her and highest echelon of the party that confirms the suspicions of Bernie Sanders‘s followers regarding the blockade to his nomination as democrat candidate for the White House last year.

According to the pact, undersigned in August 2015, in exchange for helping the Committee to collect funds, Clinton obtained a huge control of the party machinery. The money in control, and it won't be illegal – claim the lawyers - although goes beyond the boundary of vile and immoral.

And finally the Herald journalist meant that from now on the lady won't be able to do what María Ramos kitten does, throwing the stone and hiding the hand. Neither begs to the universe of her admirers to blindly believe in her.

A fresh batch of emails from Hillary Clinton’s campaign chairman and former counselor to President Obama, John Podesta, has been released by Wikileaks.

As many as 1190 new emails comprise part of the latest release, adding to the more than 4,000 emails from Podesta already released by the whistleblowing website. Wikileaks founder Julian Assange claims they are sitting on a trove of 50,000 messages. 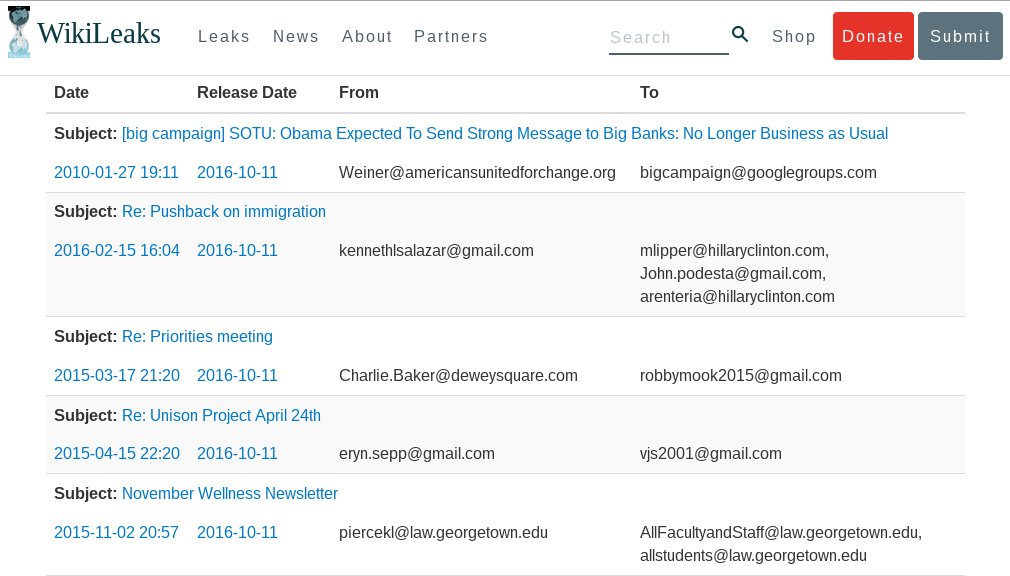 Included in the release is an email chain from February 15, 2016 titled ‘Pushback on immigration,’ which shows a request for Ken Salazar, who was the US secretary of the interior from 2009 to 2013, to write an op-ed to smear Bernie Sanders' "professed support for immigration."

The emails also reveal frustration from Clinton’s camp over President Obama’s reluctance to show support for her. Dated March 12, 2016, over a month after primaries began, advisor Neera Tanden asks Podesta “Can Obama even hint of support of Hillary before Tuesday? Really, just a directional nod would be helpful.”

“Maybe they don't want to do this, but the stakes are pretty damn high in this election for him," Tanden says. Podesta asks “Why don't you push Valerie a little bit,” possibly referencing Valerie Jarrett, senior advisor to Obama.

Podesta emailed Clinton’s Director of Communications Jennifer M Palmieri about website Business Insider in an attempt to confirm Clinton’s attendance at an event on April 12, 2015, the day she announced her run for president. They both referred to the publication as being right wing.

“Am I right that they're right wing? They get a fair amount of traffic,” Podesta asked. “They are right wing, but Philippe weirdly has cultivated them,” Palmieri replied.

The previous release revealed that many advisers close to the Clintons pushed for Bill’s role in his wife’s campaign for presidency to be reduced, as his “sex life could be damaging to her”.

Clinton confirmed the authenticity of the previous release, clarifying comments exposed by the leak during Sunday’s second presidential debate. Her admission to the National Multi-Housing Council in 2013 that politicians have “both a private position and a public position” was explained as being a discussion she had regarding the film ‘Lincoln’.

Eduardo Cunha is accused of receiving millions of dollars in kickbacks as part of the Petrobras fraud scheme and hiding the money in Swiss bank accounts.

The political future of suspended lower house speaker and impeachment mastermind Eduardo Cunha remains in limbo as prosecutors have called for a 10-year ban on the politician while a congressional ethics committee is set to vote on Tuesday on whether to strip the opposition lawmaker’s immunity for lying about secret Swiss bank accounts he used to launder bribes.

Federal prosecutors involved in investigations into corruption in the state oil firm Petrobras filed a civil lawsuit against Cunha and his wife on Monday, the Brazilian daily O Globo reported.

The lawsuit accuses Cunha of taking advantage of his elected position to “obtain illegal benefits” through a fraud scheme and seeks the return of some US$5.7 million in public funds. The prosecutors also called for Cunha to be stripped of his political rights for the next 10 years.

Oliveira, revealed in the Panama Papers as the owner of a conglomerate of 14 companies registered in the British Virgin islands from 2003 to 2011, reportedly wired US$10 million to a Swiss bank account held by Rezende Henriques in 2011. The PMDB lobbyist then wired US$1.5 million to Cunha’s Swiss account shortly after.

The transfer was one of more than over US$5 million Cunha is accused of hiding in Swiss accounts.

Cunha, who has denied wrongdoing, called the civil lawsuit “absurd” in a statement and vowed to challenge it, O Globo reported. He also accused prosecutors of looking to “create facts” ahead of the decision in the congressional ethics committee on his conduct on Tuesday.

Cunha, a key architect in painting the impeachment process as a campaign to root out government corruption despite himself facing multi-million dollar bribery and fraud charges, was suspended from his post as chief of the lower house by the Supreme Court over accusations of intimidating lawmakers and hampering investigations. His suspension came just weeks after the lower house approved moving the impeachment process in a raucous marathon session.

Suspended President Dilma Rousseff and her defense have argued that Cunha misused his power as speaker of the lower house in seeking her ouster as a form of political revenge.

However, Rousseff’s attorney Jose Eduardo Cardozo has argued that recently leaked wiretap recordings have offered a “clear” indication of a “strong coordinated component” in the plan to remove Rousseff from office that extends accusations of the misuse of power beyond Cunha.

Cunha, a controversial public figure and staunch rival of Rousseff, is the only sitting lawmaker to be charged for corruption by the Supreme Court in the Petrobras scandal.

BRASILIA – The Brazilian crisis entered a new and confused phase on Tuesday with the decision by a Supreme Court justice to order Congress to take up the impeachment of Vice President Michel Temer even as lawmakers are deciding whether to impeach President Dilma Rousseff.

BARCELONA – The family of Barcelona’s Argentine star Lionel Messi stressed on Monday that it has never used the services of Panamanian law firm Mossack Fonseca, which had 11.5 million of its documents anonymously leaked in the so-called “Panama Papers” scandal that suggests that 140 politicians and officials from around the globe, including 72 former and current world leaders, have connections with secret “offshore” companies to escape tax scrutiny in their countries.

Former President Alvaro Uribe has himself been accused of involvement in a wiretapping scheme and being connected to paramilitaries.

Brasilia, October 20 (teleSUR-RHC)-- Brazilian President Dilma Rousseff and her predecessor Luiz Inacio Lula da Silva have been exonerated of all responsibility in the Petrobras scandal in a report released this Monday by the parliamentary commission in charge of the investigation.

BRASILIA – Brazilian former President Luiz Inacio Lula da Silva has sued four journalists over an article in the news magazine Veja suggesting that he was involved in a massive corruption scandal at state oil company Petrobras.