Bogota, Jan 13 (Prensa Latina) In the first few days of 2020, 17 social leaders have been assassinated in Colombia, according to Ivan Cepeda, co-president of the Senate Peace Commission.

Cepeda published the figures on his Twitter account, at a time when frequent violent acts have been reported in the country.

In that regard, he denounced the assassination of Benjamin Banguera, a signatory to the 2016 Peace Agreement between the Colombian State and the former Revolutionary Armed Forces of Colombia?People's Army (FARC-EP) guerrillas.

One of the latest violent acts was denounced by the Catatumbo Small Farmers' Association. Social leader Tulio Sandoval, who was participating in the program to replace illegal crops, was killed by armed individuals who broke into his house, dragged him out and shot him repeatedly in front of his family.

Under such conditions, General Prosecutor Fernando Carrillo called recently to stop what he described as systematic assassination of social leaders.

All this more than three years after the signing of the Peace Agreement and 17 months since Ivan Duque took office as Colombia's president.

Rio de Janeiro, September 23 (RHC)-- Hundreds of residents in one of Rio de Janeiro's poorest neighborhoods marched this weekend to demand an end to violence in the Brazilian city after an eight-year-old girl was killed by a stray bullet during a police operation.

Saturday's rally, which featured shouts of "Justice! Justice!", came after Agatha Sales Felix was shot dead in the Complexo do Alemao favela on Friday amid what police said was a shoot-out with suspected criminals.  Officials confirmed her death and said an investigation into the incident had been opened.

According to the police's account of events, cited by the Associated Press news agency, officers were standing in a corner when they were attacked from various directions.  They responded to the attack, but there were no reports of other people being injured or arrested during the incident, AP reported.

However, some Complexo do Alemao residents blamed Felix's death on police, who have killed more than 1,200 people in Rio de Janeiro state so far this year during their operations.  "There was no shoot-out when Agatha was hit," Renata Trajana told AP. "We know the atrocities that are happening here."

"How long will we insist on a public security policy that makes the state, which should protect all of us, violate our right to life?" the organisation asked on Saturday in a series of posts on Twitter.  "We demand that the state assume its responsibility to protect the human right to life of all, regardless of their race and regardless of their place of residence," it added.

Police killings in Rio de Janeiro state - of which poor, black citizens are disproportionate victims - have soared under Governor Wilson Witzel's watch.  Police in the state killed 1,249 people in the first seven months of this year - more than five a day - marking a more than 16 percent increase compared with the same period in 2018, according to Rio's Public Security Institute (ISP).  The rise means police lethality in Rio has reached its highest level since 2003, when records began.

Meanwhile, according to the non-government violence monitor Crossfire, a growing number of people are hit, often killed, each year by stray bullets - some fired by criminals, some by police.  There were 225 deaths by stray bullets last year and more than 100 so far this year, the monitor told AP last month.

Witzel, who assumed office at the beginning of January, has previously pledged to "slaughter" criminals by using helicopter-borne snipers and warned that Rio would "dig graves" for those breaking the law under his leadership as part of his promised crackdown on the drug gangs who rule many of the state's favelas.

More than 70,000 protesters signed a letter penned by Jewish leaders who declared Trump unwelcome in Pittsburgh unless he fully denounced “white nationalism."

U.S. President Donald Trump and his wife, along with daughter and son-in-law — both White House advisors — were met with massive protests at the Tree of Life Temple in Pittsburgh Tuesday, during their visit to pay their respects after 11 Jewish worshippers were shot dead by a white-supremacist over the weekend.

At the protests, there were approximately 2,000 demonstrators, according to Reuters, displaying signs with messages condemning the administration. “President Hate, leave our state,” “We build bridges, not walls” and “Trump, Renounce White  Nationalism Now” were among the prominently projected slogans.

More than 70,000 protesters signed a letter penned by Jewish leaders who declared Trump unwelcome in the city, unless he fully denounced “white nationalism,” according to a BBC report.

Law enforcement reported hearing from 46-year-old assailant Robert  Bowers that the killings were a form of retaliation to what he believed were actions of the Jewish community that allegedly “were committing genocide to his people.”

While white nationalism is not a new phenomenon in the United States, the onset of the Trump Administration narrative and campaign slogan to put “America  First," has emboldened the movement.

These groups hold extreme views on migration, specifically to halt the process.

The Trump Administration has reimagined the campaign-era anti-immigration stance as one of his predilect strategies for the upcoming midterm elections.

United Nations, Oct 22 (Prensa Latina) Although it seems much larger in postcards, the sculpture of a knotted pistol calls the attention, be they visitors or regulars, who enter the UN headquarters in New York.

What many may not know is that work is linked to one of the four of Liverpool's most famous: British musician John Lennon, who is not only remembered as member of The Beatles, but also for his activism against violence.

Swedish sculptor Carl Frederick Reutersward was a friend of Lennon and his assassination shocked him, then he decided to dump all his emotions into a sculpture that has become symbol of the fight against violence.

This greatly contributed to its being placed in the Square of visitors of the U.N building, an institution that should care for peace and security over the world.

Now, the bronze sculpture is one of the almost obligatory places to take photos by tourists who visit the headquarters of the multilateral organization and also the most frequent image of news and events on disarmament and non-proliferation.

Other versions indicate that after the assassination of Lennon on December 8, 1980, his widow Yoko Ono asked

Reutersward to make a work in tribute to the musician.

The certain thing is that the Swedish sculptor was inspired on the most anti-militaristic songs of Lennon, the well-known Imagine.

It was initially thought to put the sculpture in Central Park, in the avenue that evoques the British Singer that is named after one of his creations: Strawberry Fields, located in front of the building Dakota, where he lived and at which door was assassinated the author of Imagine.

The knotted pistol or Sculpture to Non Violence was a gift of the Great Dukedom of Luxemburg to the UN and the best known work of Carl Fredrik ReuterswÃñrd (1934-2016), whose work is full of irony and denunciation.

The original in bronze is kept in front of the United Nations headquarters in New York, but there are some 30 replicas throughout the world, among other countries, in France and Switzerland,l varying in size in each place.

But the knotted cannon of the great Colt Phyton 357 Magnum stays unalterable as monument of the pacifist desire to silence weapons.

"That's the first time in decades, and that's something not just the NYPD, but all New Yorkers can be proud of."

The last time the most populous US city of 8.5 million had a weekend without shootings was in 1993, according to police.

But there have been intermittent spikes. The weekend of October 6-7, for example, was "terrible," with several shootings in Brooklyn and the Bronx, authorities said.

In the first half of 2018, the city recorded 147 murders, an eight percent increase over the same period in 2017, and mostly in Brooklyn and the Bronx.

(Reuters) - Four people, including a young boy, were shot and killed on Monday in a New York City apartment, police said.

Two females, one male and a boy, about five years old, were found dead from gunshot wounds inside the apartment in the borough of Queens, after police and emergency crews were called to the scene a little before 9 p.m., New York City Police Department Chief of Detectives Dermot Shea told a news conference.

Police are investigating if the shooting was a murder-suicide, Shea said.

“We will take the evidence where ever it leads us,” he said. “We don’t want to leave any stone unturned.”

Mexico, Jul 30 (Prensa Latina) Mexico City (CDMX) registered an increase in violent crimes with 600 cases in the last six months, an average of 3.3 daily, according to data released.

According to statistics from the Attorney General's Office of the CDMX, the first semester of this 2018 has been the most violent, as 600 investigation folders were opened for the crime of intentional homicide.

The figure represents 66 percent more than that registered in the first semester of 2014, year in which 361 investigative folders for murders were opened.

For four years the trend of intentional homicides has been increasing, said the Attorney General's Office of the capital.

TORONTO (Reuters) - A gunman opened fire on a Toronto street filled with people in restaurants late on Sunday, killing two people and injuring 12 others, including a young girl, authorities said. The suspected shooter was later found dead.

The girl was in a critical condition, Toronto Police Chief Mark Saunders said.

“We are looking at all possible motives ... and not closing any doors,” Saunders told reporters at the site of the shooting.

Paramedics, firefighters and police converged on the scene in Toronto’s east end. 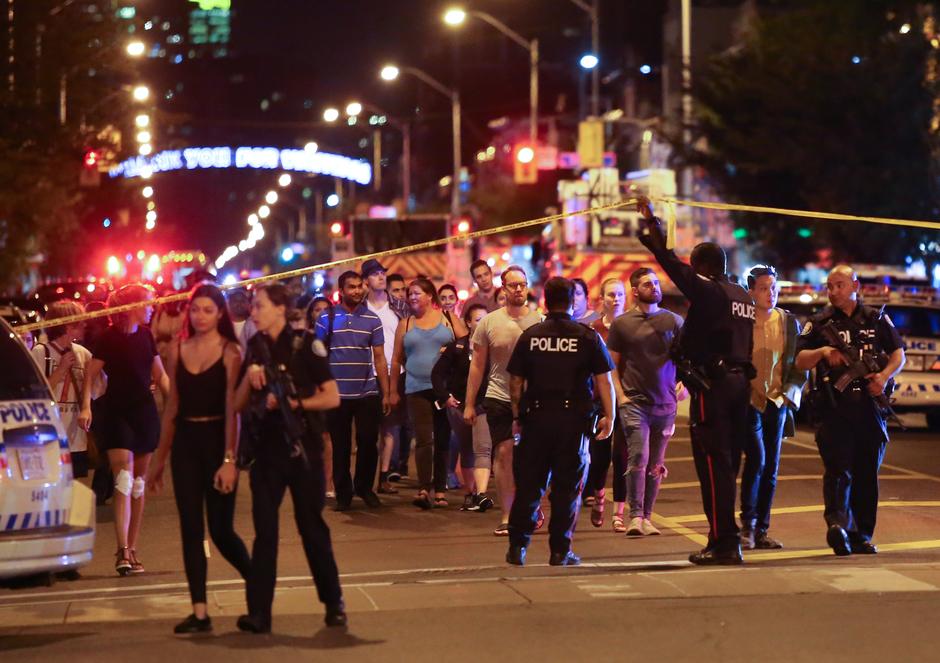 People leave an area taped off by the police near the scene of a mass shooting in Toronto, Canada, July 22, 2018. REUTERS/Chris Helgren

The gunfire on Danforth Avenue in the city’s Greektown neighborhood began at 10 p.m. local time (0200 GMT Monday), the Special Investigations Unit said, adding that the gunman walked down the busy avenue firing at groups of people.

Danforth is filled with restaurants and a family-friendly night life.

The gunman, a 29-year-old man, exchanged fire with police, fled and was later found dead, according to the Special Investigations Unit, which investigates deaths and injuries involving police.

Prime Minister Justin Trudeau said on Twitter on Monday, “The people of Toronto are strong, resilient and brave - and we’ll be there to support you through this difficult time.”

Toronto Mayor John Tory told reporters the city has a gun problem, with weapons too readily available to too many people. Tory is expected to brief city councilors on Monday morning.

Toronto is grappling with a sharp rise in gun violence this year. Deaths from gun violence has jumped 53 percent to 26 so far in 2018 from the same period last year, police data last week showed, with the number of shootings rising 13 percent.

Toronto has deployed about 200 police officers since July 20 in response to the recent spate in shootings, which city officials have blamed on gang violence.

In April, a driver deliberately plowed his white Ryder rental van into a lunch-hour crowd in Toronto, killing 10 people and injuring 15 along a roughly mile-long (1.6-km) stretch of sidewalk thronged with pedestrians.